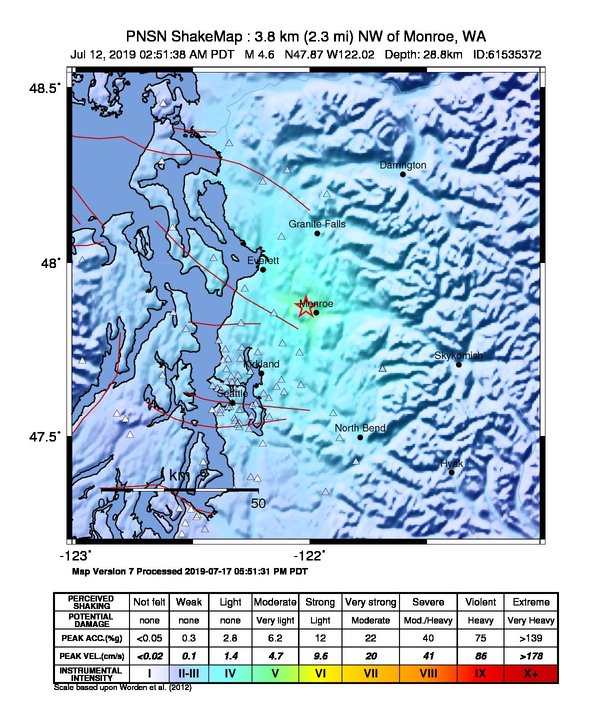 Did you feel it?

Time versus event depth plot for the same period. 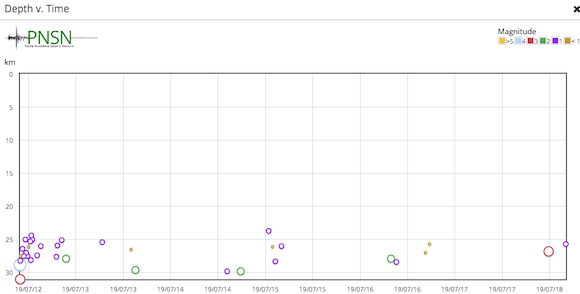 “Crustal” earthquakes originate from slip on faults within the crust of the North American Plate. Some of these earthquakes reflect stresses that are generated by the convergence of the Juan de Fuca and North America plates but most are related to stresses originating from the interaction of the North American plate and the Pacific plate in California and Nevada. This interaction results in north–south oriented compressive stresses in the crust throughout the western and northern region. These crustal earthquakes occur in the upper 25 km of the earth's crust on faults oriented roughly east–west and northwest–southeast. In southern Oregon, extensional (pull apart) stresses also cause faulting and crustal earthquakes. Many crustal fault zones have been mapped, including the Seattle Fault Zone, the South Whidbey Island Fault, the Devil's Mountain Fault, the Tacoma Fault in the Puget Sound lowlands, and the Spencer Canyon Fault in central Washington. However, not all of the active faults are mapped, and many crustal earthquakes occur on faults that don't reach the Earth's surface. The largest historically documented crustal earthquake was the 1872 M˜7 earthquake near Lake Chelan. Other crustal earthquakes have included the 1993 M5.6 Scott's Mills, Oregon, the 1993 M5.9 and M6.0 Klamath Falls, Oregon, and the 1996 M5.4 Duvall, Washington earthquakes.

(Origin) Time
Date and Time when the earthquake rupture initiated.  Large earthquake ruptures can take many seconds to finish.  Seismologists usually use Coordinated Universal Time (UTC) to avoid confusion arising from mixing observations from different time zones. This can also be referred to as Greenwich Mean Time (GMT). However, the local time is also given as a reference for what local residents experience.
Distance From
Distances and directions from hearby geographical reference points to the earthquake.  The reference points are towns, cities, and major geographic features.  The accuracy of these distances are limited both because of earthquake location uncertainties (typically for PNSN earthquakes, less than 1 km.) and because of the geographic spread of reference points such as cities.
Coordinates
Location in geographic coordinates (as Latitude, Longitude in decimal degrees) of the position on Earth's surface directly above where an earthquake rupture initiated.  PNSN coordinates are referenced to the WGS84 ellipsoid.
Depth

A P first motion is the direction in which the ground moves at the seismometer when the first P wave arrives. We distinguish between upward and downward first motions. This is the number of observations that were used to obtain the fault plane solution.

The strike is the angle between the north direction and the direction of the fault trace on the surface, while keeping the dipping fault plane to your right.

Rake is the angle, measure in the fault plane, between the strike and the direction in which the material above the fault moved relative to the material on the bottom of the fault (slip direction).

The orientation of the two possible fault planes is the best solution we can find to match the observed first motions at the seismometers using a grid search method. The uncertainty of the strike, dip, and rake indicate the number of degrees by which those values can vary and still match the observations satisfactorily.

Code, or name, to designate a particular seismic station

Network Code indicates the organization responsible for a particular station, the PNSN consists of UW=University of Washington, UO=University of Oregon, and CC=Cascade Volcano Observatory

The quality of an observed P arrival polarity  indicates how well you can tell whether it is up or down and can range from 0 (poor) to 1 (good).

Polarity means the direction of motion, in this context it means whether it is up (U) or down (D).