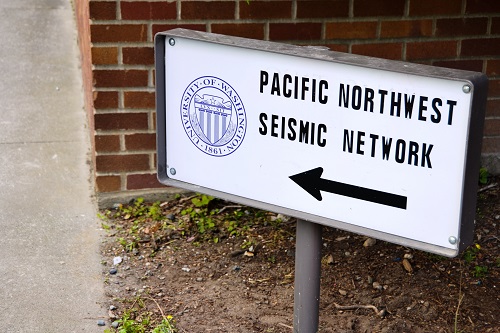 To monitor earthquake and volcanic activity across the Pacific Northwest, the University of Washington and the University of Oregon cooperatively operate the Pacific Northwest Seismic Network (PNSN). The PNSN is sponsored by the U.S. Geological Survey (USGS), the U.S. Department of Energy, the State of Washington, and the State of Oregon. Beginning in 1969 with five seismometers, the PNSN has grown to more than 300 seismograph stations distributed across the region and become the second largest seismic network in the United States. The PNSN is an organization dedicated to reducing impacts of earthquakes and volcanic eruptions in the states of Washington and Oregon by providing accurate and fast information about earthquakes and ground motions to scientists, engineers, planners, and the public.

Our headquarters is at the Department of Earth and Space Sciences at the University of Washington. However, we have offices and personnel in several locations in the region, seismic stations spread far and wide over the two states, and deep collaborations with other institutions inside and outside of Cascadia that make it a bit of a challenge to define sharply our organizational boundaries.