We were not expecting the next northern Washington - Southern Vancouver Island ETS until late Oct or Nov. 2013......BUT, it may have started early. As of Sep 12, 2013 there have been 6 days of tremor activity in the area we have often seen an ETS start in the past; that is south-central Puget Sound. Thus we are again starting a blog here to document how this fall event goes.

NEWS (latest at the top)

Oct 11,2013: I think it is time to call it over. The last day with any locatable tremor was Oct 8. So it went from Sep 7 - Oct 8, just over a month which is fairly typical for ETS events in this area. However, it was not as energetic has most previous events but extended over a larger area. We will need to wait untill the geodesy types figure out what the slip was for this event. I suspect it will not be as much slip at any individual place but may extend over a larger area.

Oct 7, 2013: Yep, it seems to be slowing down. Up until Oct 4 there was, at least moderate tremor over a good sized area in southern Vancouver Island. Then it got weaker and more dispersed and over the last two days just a few small batches anywhere in the region. So, is it over? Maybe, but this whole event has been strange. While it has lasted almost exactly a month the total number of tremor hours (654) and number of events (11,080) is only and 60% of the total for the last ETS that covered about the same region. Since this one has bounced around more than we have seen in the past, the geodesists say it is still low on the amount of slip and the total tremor is still not that much, maybe it will continue to bounce around and fill in. To help compare with previous ETS's I have filled in the comparative weekly tremor maps and the total ETS density maps for this episode. Check them out and do your own interpretation.

Oct 3, 2013: This time, I was only partially wrong. Maybe I am getting better at anticipating this silly thing. Indeed the two northern batches of tremor merged into one large batch, but they didn't then quit as I had previously predicted. Instead the southern batch seems to have died out. There is a hint that over the past couple of days the single batch that now extends from northwest of Port Alberni down to Victoria has shifted slightly up-dip and strengthened in the south while becoming weaker in the north. During this period there have been times with very strong tremor on south-central Vancouver Island stations. To this seismologists untrained eye it seems that some of the GPS station in the northern Olympics and Southern Vancouver Island are showing changes. Surely the GPS gurus should be able to confirm slip in this area, at least over the past week or so. So, what next? Anyones guess. It is not likely to move back south across the straits since that region has already had pretty strong tremor a week or so ago. It has already been farther north. Therefore, there is nothing for it to do but stay where it is and slowly die out.

Or....maybe not. I just got word from Herb Dragert that this ETS may not be quite over.
Over the past 9 days we have seen surface deformation at a number of sites. Of the GPS sites that are included in our network analyses, the largest horizontal offsets we see up to now are about 5 to 6 mm (at SC03 and P424). Our horizontal offsets at ALBH (Victoria GPS site) are still only about 1/2 of the usual value so maybe there is still some slip to come beneath southern Vancouver Island?

Sep 30, 2013: OK, wrong again. The two southern batches I said were moving toward each other --- they aint doing that. The three distinct tremor batches remain distinctly separate; however it is the northern two batches that are moving toward each other, while the southenr batch has now moved from the northern Olympics to the middle of the straits with its leading edge on the southern Vancouver Island coast. There is still a small gap between the northern two batches lined up with the Port Alberni Inlet but I expect the gap to close in the next few days. This part of the ETS may then be over. Oh dear. Did I just make another prediction that will turn out to be wrong?

By The Way: none other than Herr Doctor Professor A. Wech PhD showed up in my office today on his way between Japan and Alaska. He politely cautioned me from anthropomorphizing the tremor with terms such as "jumping" or "hopping" (though it seems, "skipping" may be OK). In particular he suggested that my post of Sep 22 implies that the tremor in the Olympics "jumped" across the straits to southern Vancouver Island. He thinks it is equally likely (maybe more likely) that these are two separate and unrelated tremor bursts that just happened to be near each other in time. In particular, tremor that is down-dip (to the east) often occurs in short batches somewhat independently of main ETS events. We both proceeded to arm wave and disagreed on agreeing about just about everything. He then cryptically referred to not only silent earthquakes but also silent slip; ie slip without tremor. Uhmm, if no one is in the forest when a tree falls, does it make......tremor?

Sep 27, 2013: AAARRGGGHH!!! OK, it is NOT progressing as it should. Two days after my last post, on Sep 24, the tremor became weak and then split into two batches, one in the north-central Olympics the other just south of Nanaimo on Vancouver Island. Over the next few days these two batches retained their positions with a slight tendency to move toward each other. Also, the batch in northern Vancouver Island separate from the main ETS area continues to be active at about the same level. So we now have three distinct tremor batches in northern Cascadia, none of which is particularly strong nor are they moving much but have been persistent now for four days. I give up making suggestions as to what might come next. At least the southern Cascadia tremor in northern California has stopped.

Sep 22, 2013: OK, it is for real now. No more messing around with gaps and skips and fades and questions. It looks like the real thing over the past couple of days. As of Sep 20 it was still questionable with tremor spit into two weak zones, one in the central Olumpics and the other just south of Victoria. Yesterday both zones moved to close the gap and today the gap is totally filled with tremor, ie a continuous zone of tremor from the central Olympics to Victoria. Not only that but the spectrograms show the tremor to be quite strong and continuous over hours at a time. This looks more like it should. Now the questions is which way will it move. Most ETS events over the past 10 years (other than last year's) progress from south to north but this already is pretty far north so maybe it will progress south; or maybe it will now go both directions.

Maybe its time for a summary of the first two weeks of this event. Here is a plot of wech-o-meter locations from Sep 7 - Sep 22 color coded by time (blue are the earliest and dark red the latest). 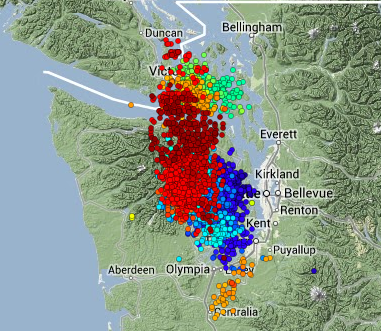 To summarize, the earliest tremor was in the southern Puget Sound just west of Seattle (down-dip of the main zone). It then moved up-dip (west) and north for a bit and then jumped across the Straits on Sep 13 leaving a gap in the northern Olympics and Straits. It bounced around just south east of Victoria for a while and then jumped back across the Straits to the central Olympics where it became stronger before moving north and filling in the gap.

If this is not enough confusion going on it seems that other parts of Cascadia are trying to get into the act also. Northern Vancouver Island seems to have had significant tremor over the past seven days (also jumping around a bit without an obvious linear progression). Also, after little bursts of tremor now and then in southern Cascadia from Grants Pass, OR to west of Chico, CA starting in early September, things have settled down to fairly strong, near continuous tremor starting on Sep. 17 just north of Red Bluff and moving slowly south since then. Thus, as we have seen in the past there are periods when tremor seems to light up multiple patches in Cascadia at nearly the same time.

Sep. 19, 2013:  What a strange ETS;  if it really is one yet. After almost dying out to nothing on Sep 17, the tremor picked up slightly and started moving back south to partially fill in the gap left at the end of Sep 13. Then today that section of tremor quit intirely and fairly strong tremor started up back south in the central Olympics. Previous ETS events progress more or less smoothly, mostly in one direction with some minor reversals now and then. But this one seems to jump around quite a bit leaving gaps. Our working model for an ETS is that a slow-slip slip front moves along strike at an average rate of about 10 km/day with streaks up and down dip and short reversals moving maybe ten times faster. The past 12 days have seen very little of this sort of pattern. What next?

Sep. 16, 2013:  Oh dear, it may be dying out. There was only about 5 hours of weak tremor today located just south of yesterday's tremor. It may be trying to fill in the gap left when it jumped from the Olympic Peninsula to the southern coast of Vancouver Island late on Sep 13. This gap is well resolved by two diferent subnetworks of stations and is pretty unique in the record looking back to other tremor episodes. This gap is unusual enough to get the attemtion of Dr. Herb "ETS" Dragert of PGC who seems more than a little interested in such an observation. Herb looked into possible GPS signals and reports:
What I can add at this stage  is that as of yesterday, I have not been able to resolve any displacements for GPS stations in the tremor region which is unusual for 9 days of tremor. This would be consistent with  slip (if any) on the plate interface being very small at this stage (i.e. less than  ~0.5 cm) or slip occurring deeper which would result in reduced surface displacements.

Sep. 14, 2013: Tremor continues and is definitely moving north. In fact between 13 and 14 Sep. it jumped from the northern Olympic Peninsula into southern Vancouver Island and seems to be significantly more down-dip (eastward) than the track of previous ETS events in this area. The speed with which it is moving seems quite unusual. We also know of no previous ETS that has jumped like this without filling in the gap. It is almost to Victoria already.

Sep. 12, 2013: Started a new ETS blog page. While there was a short burst of tremor in south-central Puget Sound on Sep 4, 2013, there was a clear and sustained period of tremor on Sep 7 and every day since then. Starting down dip (mostly east of Hood Canal) it moved first south a bit and then on Sep 11 seems to have jumped back slightly north and up-dip. This is a characteristic type of start to these ETS events. Since there have been false starts to these in the past we typically want to see ten days of tremor in a row before it is pretty much assured to be a real ETS thus we will wait for another several days before officially declaring a start.