This BLOG-like page is being generated in a form similar to previous ETS ones to document and provide information on a Northern Washington ETS that should start sometime between late January and March 2017.  There are no special experiments in the field for this ETS. The Imaging Magma Under St. Helens (iMUSH) experiment terminated last summer.  We will be tracking and reporting on this ETS using data only from the real-time regional networks (UW,  UO, CN, TA, PB, CA) and/or information reported to us by others.

Information will be posted on this page (latest at the bottom) and references to figures from time to time.

NEWS (latest is at the bottom):

Jan 23, 2017 - Tremor throughout Cascadia seemed to have been relatively quiet over the past four months, but a detailed look at the data used by the wech-o-meter showed that for four of our subgroups there were many station problems or outages that likely made it much less sensitive for the past 6 months or more than it was in the past.  Details of this are provided in the blog about the coming ETS.

Jan 28, 2017 - In response to the loss of a number of stations in the far south and far north sub-regions: NV NC and CC) we have arranged to receive a few other data channels from our cooperating networks (Canadian National Seismic Network, the Berkeley Seismic Network and Northern California Seismic Network).  These have now been configured in to the wech-o-meter.  Data channels from the sub-regions where this ETS is expected (BC,NW,SM) are in pretty good shape and thus remain in the same configuration as before.

Feb 21, 2017 - I am thinking that the ETS has started.  Five days with from 5 to 17 hours each day with moderate to strong tremor in the area directly west of Seattle seems to be a pretty good sign of it starting.  There also looks to be a hint of a slight migration up-dip and to the north, which is typical of an ETS event.  This seems to be pretty close to right on schedule as well, ~14 months since the last one started for this section on Dec. 22, 2015 .  Thus I am calling this ETS to have started.  Of course, to spite me the tremor gods will probably stop in now.  More will be posted here as it develops.

Feb 25, 2017 - OK, it is for sure a real ETS.  Just over a week with strong tremor every day and spreading mostly to the north.  Over the past couple of days there seems to be a slight spread to the south.  If this is similar to ETS events of old (2007 - 2010) it will not spread much farther south than the southern end of Puget Sound (PS).  Most of the spread will be to the north over the next two to three weeks.  These ETS events normally stop spreading north in southern Vancouver Island (VI); however several recent ETS events hooked both the larger VI section with the PS to produce extra long and large ETS events.  Are we back to each section alone?  Time will tell.  In the meantime here is a plot for the tremor over the past week color coded by time (blue - early, red-late).  One might compare this pattern with all previous reported ETS events in weekly snapshots.  Note that Week-0 is the week before the ETS is declared and sometimes has tremor bursts down-dip (east) of the main zone. Clicking on any individual plot in the Compare Maps Page will give a blow up of it. 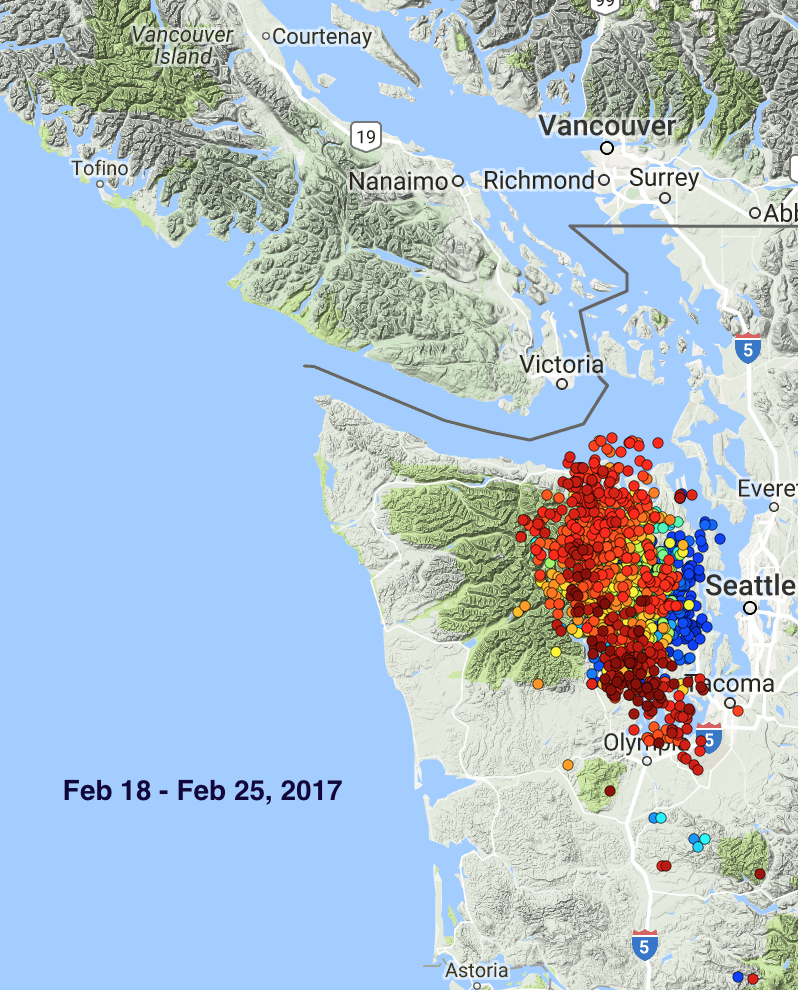 March 2, 2017 - It looks as if we have a different sort of ETS going on.  As soon as I suggested that this ETS would progress up into southern Vancouver Island, it stopped going there.  The last bit of tremor in the north part of this ETS took place near Port Angeles on the Olympic Peninsula on Feb. 27.  Since then tremor has continued only in the south part of this zone, near Olympia.  Even there the tremor detected is comparatively weak.  While not a geodesist it looks as if this ETS is just barely starting showing up on a few southeastern Olympics GPS stations. If it dies out soon then this will be the weakest, shortest, smallest ETS we have yet seen.  What's the deal?

March 9, 2017 - What a pathetic ETS! It looks to be over as of March 5; no activity in the past three days.  In fact the tremor on March 3 and 4 was limited and weak after a hiatus of activity on March 2. Below is a figure showing a color coded by time (blue - oldest, red - newest) plot of tremor locations for this whole ETS.  After starting in south central Puget Sound it spread in a typical fashion to the north but then stagnated.  Rather than continuing into Canada (maybe they built a wall) it spread back to the south and got weaker over time.  The very end of the sequence spread even slightly south of Olympia. 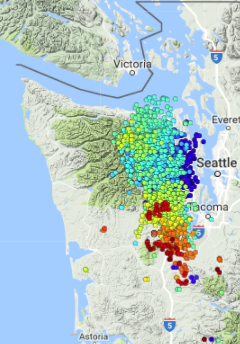 No northern Washington ETS of the past 15 years (since we have been monitoring it) has been this short in time and limited in space.  Wech-o-meter plots of the past 10 years illustrate most of this period. The closest event similar to this one might be the second half of the fall-2014 event.  While run together in time this event had a jump from a major part in Vancouver Island to a second large part in Northern Washington with a small gap between them with little to no tremor.  Even in this case the Washington part lasted for three weeks.  The geodetic component looks, at least for now, to be similarly limited.  Below is a plot of GPS displacements from four station that usually show this type of ETS event very well.  Note the arrows pointing to the previous ETS at the end of 2015.  In the current case only station P418 (located in southern Olympics west of Tacoma) shows any significant recent displacements.  Of course, often the GPS signals lag those of tremor so maybe something will change in the next week or so. 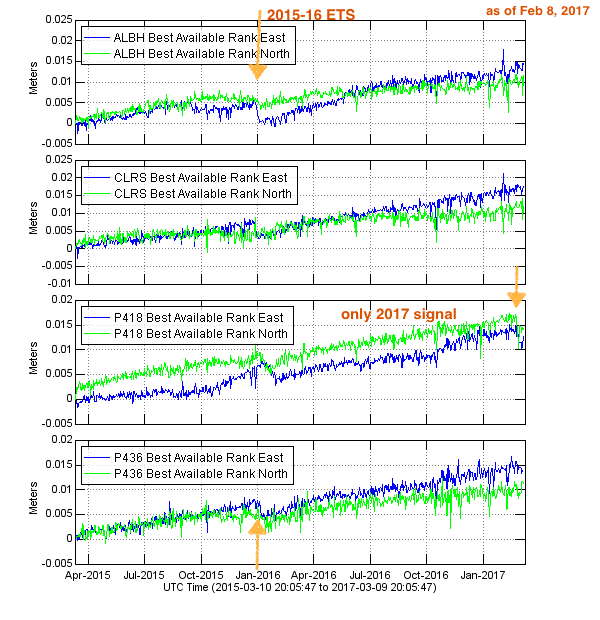 The question now is what about southern Vancouver Island.  This part of the Cascadia seismic zone has always participated in one of the 14 month ETS events.  Will one show up here soon or is this stretch going to skip this ETS?  I am giving up trying to anticipate what this crazy place will do next.

Mar. 20, 2017 - Well I'll be horn-swaggled!  It seems to be going again. A couple of days ago tremor started up in the north of the Olympics and now seems to be slowly moving north.  After an almost two week hiatus maybe the typical 14-month ETS event will now finish coving the area it normally does, which is from southern Puget Sound to central Vancouver Island.  Maybe the total event will be similar to previous ones, just with a two week rest.  Stay tuned.

Mar. 23, 2017 - Indeed, we seems to now have the rest of this ETS going.  It has been moving slowly but steadily at about 10 km per day to the north and as of today has clearly crossed into Canada with some tremor location just to the west of Victoria. This non-geodesist does not se any evidence of this yet on GPS stations north of the southern Olympics but after only 5 days of renewed tremor this may be normal.  Several of us have been wondering if the 2 week hiatus for this event is highly unusual and our thinking is this is not without precedence.  Professor, Dr. Ken Creager did some minor calculations and said "ah ha". 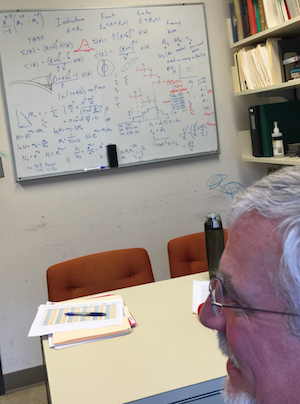 Looking back in 2008 he remembered that I had thought the ETS was going in March.  There had been almost a week of tremor in the south central Puget Sound that seemed to be moving north.  But then it stopped.  The rest of the ETS didn't get going again until the end of April picking up from the central Olympics and then moving north.  Very late in that sequence tremor jumped back to the south end of Puget Sound as the main part sputtered out in central south Vancouver Island. Dr. Creager has been waving his arms and mumbling incoherent thoughts about winter time ETS events being different and extra snow pack or extra water or....  Clearly he has been under gray, rainy skies too long.

Mar. 25, 2017 - A full week in to this second part and it looks to be acting totally normally after taking a two week break. For the compare maps plots I have just pretended that there was no pause and Week-3 comes right after Week-2 rather than two weeks later.  Confusing, but then I am easily confused.

Apr. 8, 2017 - I think it is definitely over.  In fact, the last whimper of some tremor was on Apr 6 and so I am going to call that the last day of this ETS. The last three weeks have been very well behaved progressing smoothly from the northern Olympics to its termination just west of Comox, BC.

In retrospect this one ended up being pretty normal if you ignore the full two week pause between Mar. 5 and Mar 18. There were with just over 10,000 individual tremor locations stretching from southern Puget Sound to central Vancouver Island.    There were 35 days of tremor, which is right at the average for the past six ETS events. Comparing the tremor density plots for the previous couple of ETS events, this one seems to be very similar.  Note that the 2014 ETS event seems to have a spatial segmentation near Victoria BC.  While in this case the pause between these two sections was very short in time the tremor actually jumped to the south and then migrated back north to fill in the missing area. In the current, 2017 ETS it only seemed to pause in time and then pick back up continuing a smooth migration north.

What about the GPS displacements?  The plot above made on Mar 9 showed only station P418 (southern Olympics) responding to the ETS.  Below is the same plot updated to today (Apr 11, 2017).  One can see that all four stations show the ETS quite well.  It is a bit confusing that station P436 (in southwestern Olympics) now sees the ETS with a slower response even though tremor did not extend into this area near the end of the ETS.  I will leave it to a geodesist to do more arm waving to explain these details. 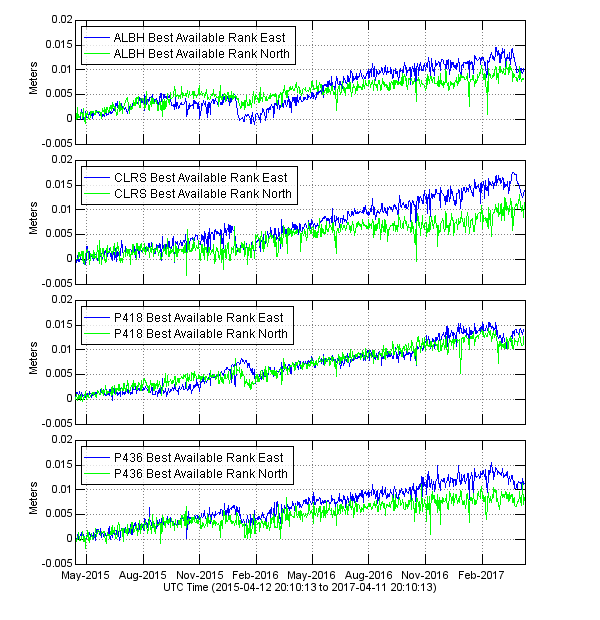