This BLOG-like page is being generated in a form similar to previous ETS ones to document and provide information on a Northern Washington ETS that should start sometime between Oct. and Dec, 2020.  There are no special experiments in the field for this ETS. We will be tracking and reporting on this ETS using data only from the real-time regional networks (UW,  UO, CN, PB, CA) and/or information reported to us by others.

Information will be posted on this page (latest at the bottom) and references to figures from time to time.

NEWS (latest is at the bottom):

Sep. 16, 2020 - In anticipation of a routine ETS (or pair of them) in the northern Washington  (NWA) - southern Vancouver Island (SVI) section of Cascadia I am starting this blog a bit early.  Of course, how this next ETS will start and if it will be one regular event (as typical over the past 15 years) or come as a pair as it (they) did last year is unknown at this point.  If one looks at the details of the 2019 - summer ETS one sees that it really was two smaller ETS events separated by over two months.  Thus we really don't know when the typical repeat time of ~14 months clock should start.  The recent burst of activity in Southern Vancouver Island seems to be just that, a burst of a few days and not strong or long enough to be an ETS. The next ETS in this area could start as soon as early October or it might not be until January, 2021;  or there could be again two separate ETS events separated by months.  ETS sequences are far from understood so any number of things are possible. Stay tuned.

By the way, we have received inquiries from several people about reports of an unprecedented amount of tremor taking place recently.  It is not clear to us why some think there is significantly unusual tremor activity taking place.  There is not. We recommend before folks get all excited about what our daily tremor page shows that one review the data and reports for the past 15+ years.  Lots of details can be found in the individual reports listed at the Tremor Overview page and a very good summary of overall tremor patterns was written by Aaron Wech, an expert in such events not only in Cascadia but also elsewhere in the world called A Perspective on Tremor Activity.  Dr. Wech recently allowed how we should keep in mind the break or change in the catalog that occurred in February 2018 when he upgraded the monitoring system. Changes in the clustering/detection algorithm then result in a ~50% increase in detected epicenters, so comparing raw number of detections today vs  before 2018 isn't apples to apples. Having tremor take place up and down Cascadia at the same time has occurred several times in the past 15 years and thus is not unprecedented.  A report on an example can be found at Deep Tremor over much of Cascadia from back in 2013.

Oct. 9, 2020 - I am not officially calling it started.... but... the next NWA-SVI ETS may have started. Since Oct 4 there seems to be increasing amounts of tremor each day in the central Puget Sound area.  Normally we like to wait to see a week of significant tremor every day before we think an ETS is really underway.  There have been periods in the past where several days of tremor peters out just about the time we think a real ETS is going.  We definitely are in the time period, almost exactly 14 months since the beginning of the previous ETS.  That one started on Aug 11, 2019 with tremor in the central Puget Sound and then slowly progressed to the north before pausing two weeks later not to start again for another two months.  The tremor of the past few days is roughly in the same place.  Looking at the original data and envelopes it does seem to be a bit stronger over the past two days than when it started. So, very tentatively..... it has..... nah, I'll wait a couple more days before an official pronouncement.

Oct. 11, 2020 -  OK, OK so it has started already. Indeed, as tentatively said before it seems late in the day on Oct 4 is when the first tremor was detected and since then there has been continuing tremor off and on every day, getting stronger over the last few days.  This event seems to have started just west of Seattle, under the Kitsap Peninsula and then over the next few days moved slightly to the west (up dip on the plate interface) and spread both north and south.  Over the past couple of days there is a hint that more events are in the northern part of the patch and thus maybe it has started moving north.... just as it should to become a regular NWA-SVI ETS event.

As additional confirmation I heard from none oher than Dr. "Slow-Slip" himself, Herb Dragert one of the original discoverers and namers of "Eposodic Tremor and Slip" who sent me the following: "If I squint hard at the GPS results, there is the indication of westward displacement at a number of GPS sites on the west side of Puget Sound and perhaps one more day of data will confirm this". Herb, like me, retired a few years ago but can't seem to help "playing" with interesting geophysical activity.  I trust his bleary eyes and so will not even wait for one more day.

Oh dear, I just heard from another ETS nerd.  Dr. Ken Creager, who helped his then graduate student, Aaron Wech develop the famous "wech-o-meter" (tremor detections and plotting system) just sent me a warning that: "Using the Legacy detections (original, less sensitive wech-o-meter), and the last 7 years of data, about half of the tremor swarms in this area that reach 70 hours (this one has just over 70 so far) have turned out to be ETS and half have not".  Ok, better than half the cases reported.... I will take those odds and still proclaim: "THIS DUDE HAS STARTED".  Of course, I have been embarrassingly wrong many times before.  So, fire me.  Oh, already retired, so not an option.

Oct 15, 2020 - It is now double official! While this seismologist tried to look at some GPS data and ended up with his eyes crossed and couldn't figure out what was doing what where, I got the following note from Herb Dragert, a real (though retired) geodesist. 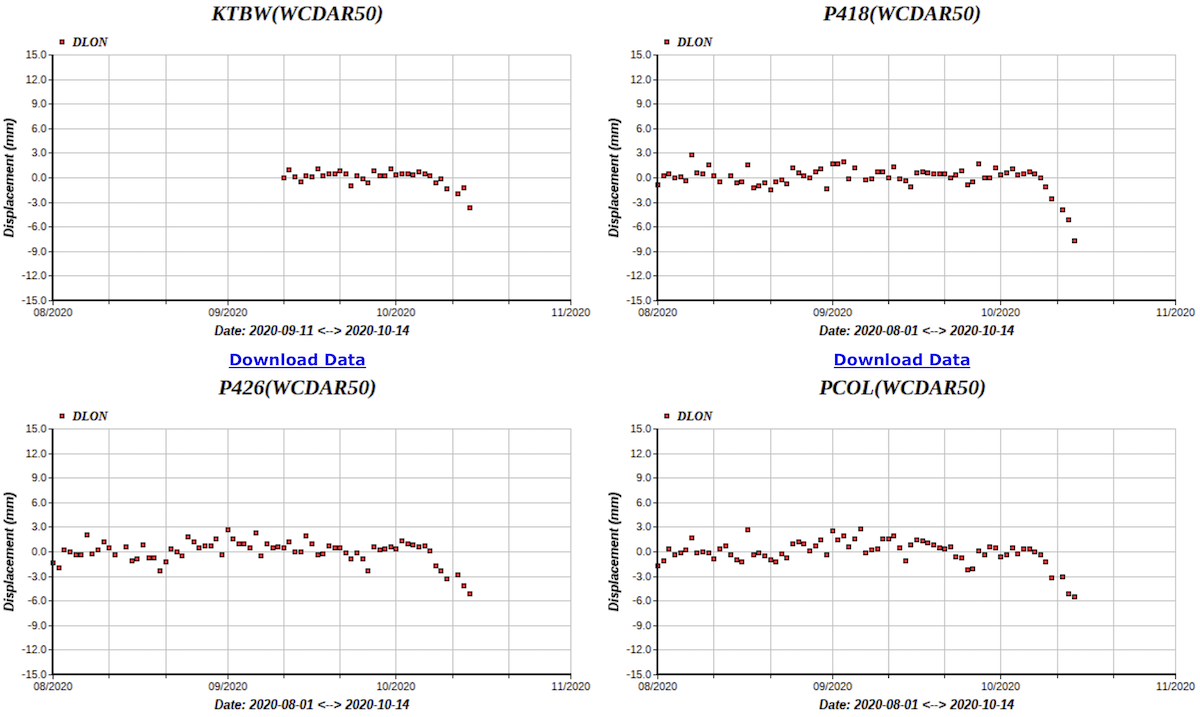 Even a seismologist such as myself can see there are obvious deviations from the background levels that start about Oct 6 or 7, only a few days after the first tremor was observed.​ Herb seems to know how to get the correct data and process/plot it to best show what is going on.

The latest tremor locations seem to have spread both south and a bit north and early this morning a patch jumped all the way onto southern Vancouver Island leaving a gap in between them and those in the Olympics.  I would expect this gap to fill in over the next few days unless, of course, those Canadian tremor events are smart enough to keep an appropriate "social distance" from the US ones.

Oct 22, 2020 - Sure enough, I said it would go one way (north and fill in the gap) and it goes the other (south).  Three days after my previous post the tremor died out on Vancouver Island.  It has not (yet) filled in the gap between NWA and SVI, but instead started moving slowly south.  Below is a tremor map color coded by time (blue early and red recent) 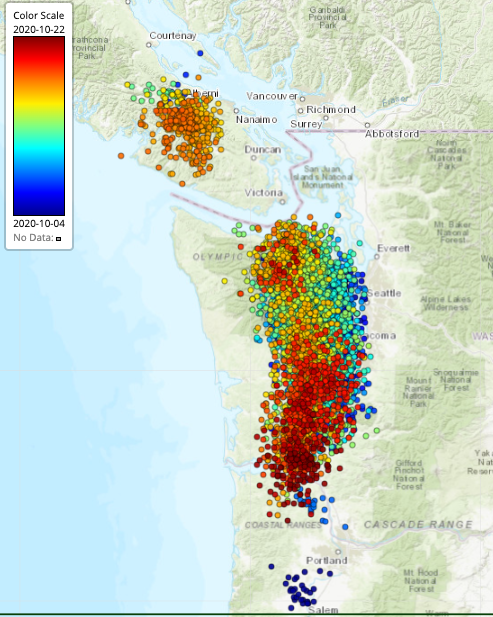 There are a lot of individual tremor detections plotted on here but one can see a pattern of starting just west of Seattle (with a small blob down near Portland), then moving west and spreading a bit north and south.  During a four day period (Oct 15-18) it continued in the central part but also had a bunch up on Vancouver Island.  After that it started moving slowly to the south.  It is now about to close the gap between the early Portland bunch and the main one.

The GPS motions associated with this are now quite clear on a number of stations in the central to south Puget Sound region, but stations to the south in southern Washington have not yet shown any obvious motion.  We will be working on looking at the GPS data more over the next day or two.