This BLOG-like page is being generated in a form similar to previous ETS ones to document and provide information on a Northern Washington ETS that should start this this winter.  There are no special experiments in the field for this ETS.  The only special seismic field experiement under way currently in the region is the Imaging Magma Under St. Helens (iMUSH) experiment.  It will certainly record tremor associated with the coming ETS but is not well located to study it.  We will be tracking and reporting on this ETS using data only from the real-time regional networks (UW, CN, TA, PB, CN) and/or information reported to us by others.

NEWS (latest is at the bottom)

Nov 18, 2014 - After a false alarm reported in a PNSN blog post back in early September there seemed to be no unusual tremor activity in the region untill recently.  Starting on Nov 3, 2014 a persistent tremor sequence began in central Vancouver Island and progressed slowly southward.  As of Nov. 14 the sequence had continued long enough to be considered a full ETS.  Based on a request sent out to several ETS researchers for their opinion on this activity a PNSN blog was posted with some interesting analysis.  Subsequent observations and comments will be posted to this special tremor page.

Dec 12, 2014 - This blogger has been away from the office for a few months and gotten way behind on writing things up or even looking in any detail what has been going on.  Every time I look it seems something different it happening and not really like any previous ETS.  At this point it seems as if the central-southern Vancouver Island ETS lasted from Nov 3 to Nov 26 and may now be over.  Starting about Nov 23 (overlapping with the end of the VI event) the northern Washington region started up and may still be going on. Over the past couple of days there has been very strong storm noise on many stations and also a number of key stations in the Olympics have been knocked out.  Thus the wech-o-meter is likely missing any tremor that may still be taking place.

Dec 18. 2014 - What a strange ETS.  I assume it is over as of about Dec 10, though there may have been some activity over the following few days.  Because of a series of major storms hitting western Washington we lost several critical stations for days.  Also, data from one whole set of stations from the Plate Boundary Observatory (PBO) were lost for the same several days and so the poor wech-o-meter was missing enough data that it remained silent for several days. When the PBO stations returned on Dec 14 the data were still intermitent enough that the wech-o-meter threw up its "virtual" hands in frustration and produced a bunch of bogus locations.  This confused several people at first but looking at the original data and/or envelopes directly one can see many glitches and data artifacts. The wech-o-meter algorithm is good enough to filter out most of those but now and then it gets confused enough to let bogus locations through.  Therefore, not being able to say anything different I am going to call this ETS officially over as of Dec 10.

So, what is it all about?  It seems there are really two separate ETS events during this period as mentioned before. One started in central Vancouver Island (VI) on Nov 3 and progressed fairly smoothly to the south ending about Nov 26.  The second started in the south Central Puget Sound on Nov 23, hung around the starting area for a few days and then moved north in a typical pattern for the Northern Washington (NW) ETS ending on Dec 10.  Here are plots of these two events with color coding by time, blue the earliest locations and red the most recent. 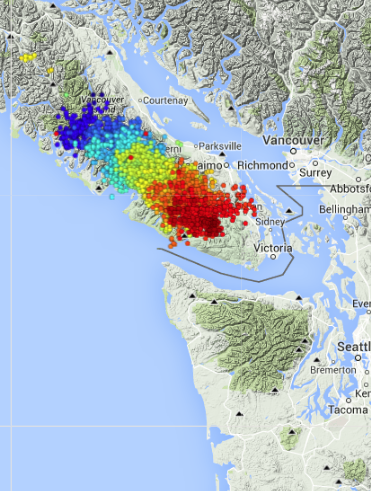 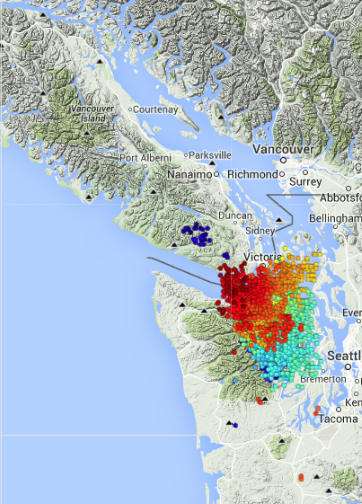 Note that both ETS events start at the opposite ends of their zone and progress toward the middle, both finishing in an area west of Victoria on southern Vancouver Island and not over lapping.  Thus, unlike previous thoughts of some of us that the VI event would progress southerward and turn into the NW event, they seem to have stayed separate and may have been totally independent of one another, just fortuitously at about the same time.

Just to confirm that these were true ETS events I have looked at the PANGA GPS data.  While I am NOT a geodosist and thus my interpretations are worth very little I call your attention to the PANGA website and to look particularly at the BCR region and WOP region. I reproduce the last few years of these two regions of the longitude (east-west) plot.  Note that for the BCR region the downward offset on many stations starts in early November and ends by the end of the month while the WOP region shows a delay in the timing of the offsets. 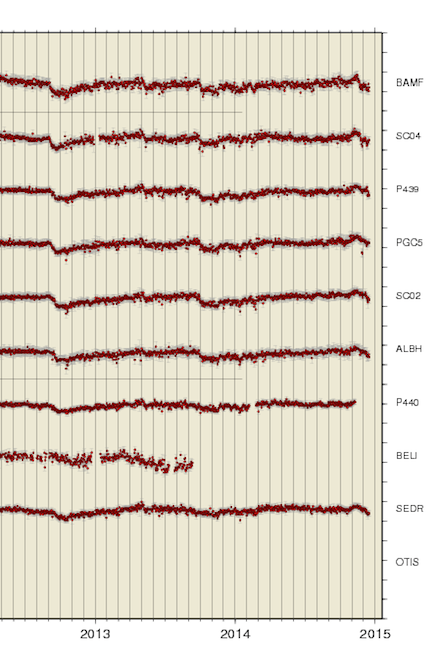 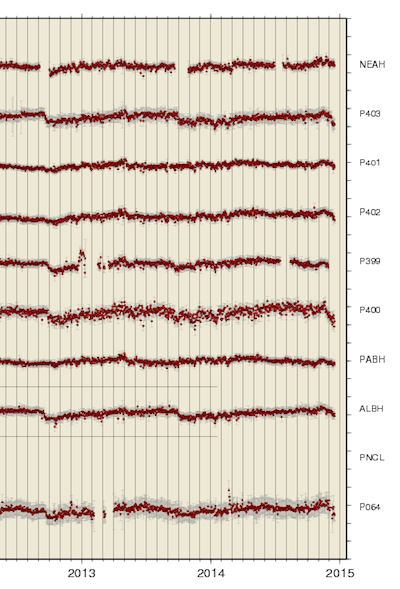