Canadian ETS morphing to Washington one?

Canadian ETS morphing to Washington one?

Having noticed the persistence of the central Vancouver Island tremor several days ago (along with several commenters to the PNSN BLOGs) I sent out an e-mail to many of the local ETS experts with experience studying this region.  Since back in early September I posted a blog intimating that the 14-month ETS was starting early.  Oops. It wasn't.  So now I am hoping to sucker someone else into making prognostications, perhaps based on wiser interpretations.  I have received no responses other than one from Dr. Wech (of the famous wech-o-meter) who is currently working for the US Geological Survey's Alaska Volcano Observatory.  I include his comments and a figure verbatim and will be particularly happy to hear from any geodesists with relevant data and will add their interpretations to this blog later.

At this point, I'm guessing the current Vancouver Island activity will make it across the border. Right now it is migrating along a portion of the margin that has experienced relatively recent downdip tremor (light red, teal and blue...both of which plot beneath current dark red tremor). And looking at the last several months, its SE along-strike migration will continue to parallel recent downdip tremor. Assuming this downdip tremor represents slip transferring stress updip, conditions should be right for large updip slip to propagate down into Washington -- at least until it reaches the location of the August 2014 slip in Puget Sound (dark yellow), which was updip and recent enough to potentially act as a low slip-deficit barrier (although that event wasn't particularly large, so maybe not). Then again, I'm about to press "Send", so we can probably expect it all to shut off.........now. 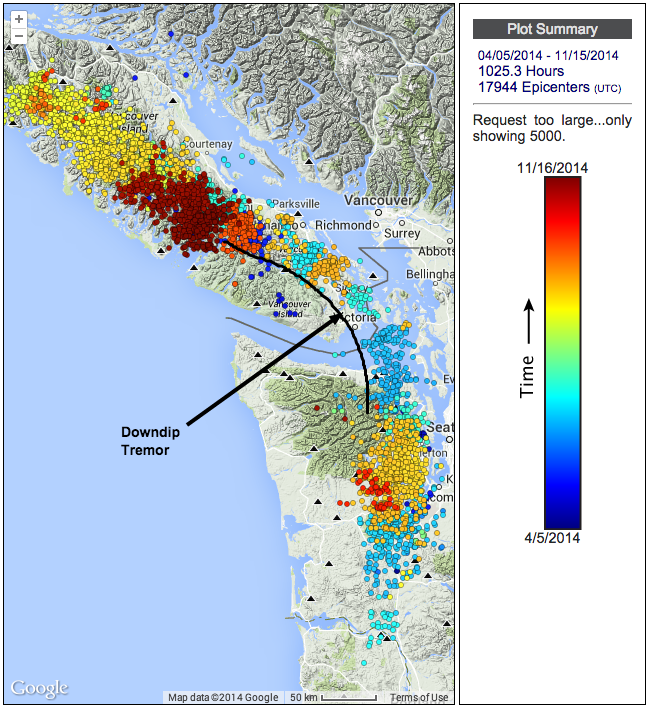 Note that there are many comments here from several different people with interesting observations and interpretations.  We at the PNSN encourage such comments and are happy to have the public engage in such discussions.  However, we often do not have time to respond to questions or engage in the discussions ourselves.  We do keep the PNSN web pages as a record of our (and other's) observations of interesting or on-going activity.  We also maintain a separate tremor "blog" page that we try to keep updated with information about each of the 14 month, Northern washington ETS events.  There is such a blog for this ETS of Winter, 2014.