Seismology occasionally fascinates the public, an occupational hazard that struck the PNSN in January.

The source time function was a professional football player: Marshawn Lynch, whose spectacular 15-second touchdown run assured the local Seahawk team an unlikely and coveted victory on January 8, 2011, and a victory in the playoffs. Through the response of the roar and stomping of the tens of thousands of feet, the ground shook enough that the vibrations were recorded by the Pacific Northwest Seismic Network (PNSN) strong-motion station KDK, a block or so away. One-station signals are always hard to verify, but the timing matched. Recordings revealed a peak acceleration of about 1/20,000th of a g, and peak motion of about 1/100th of a mm. 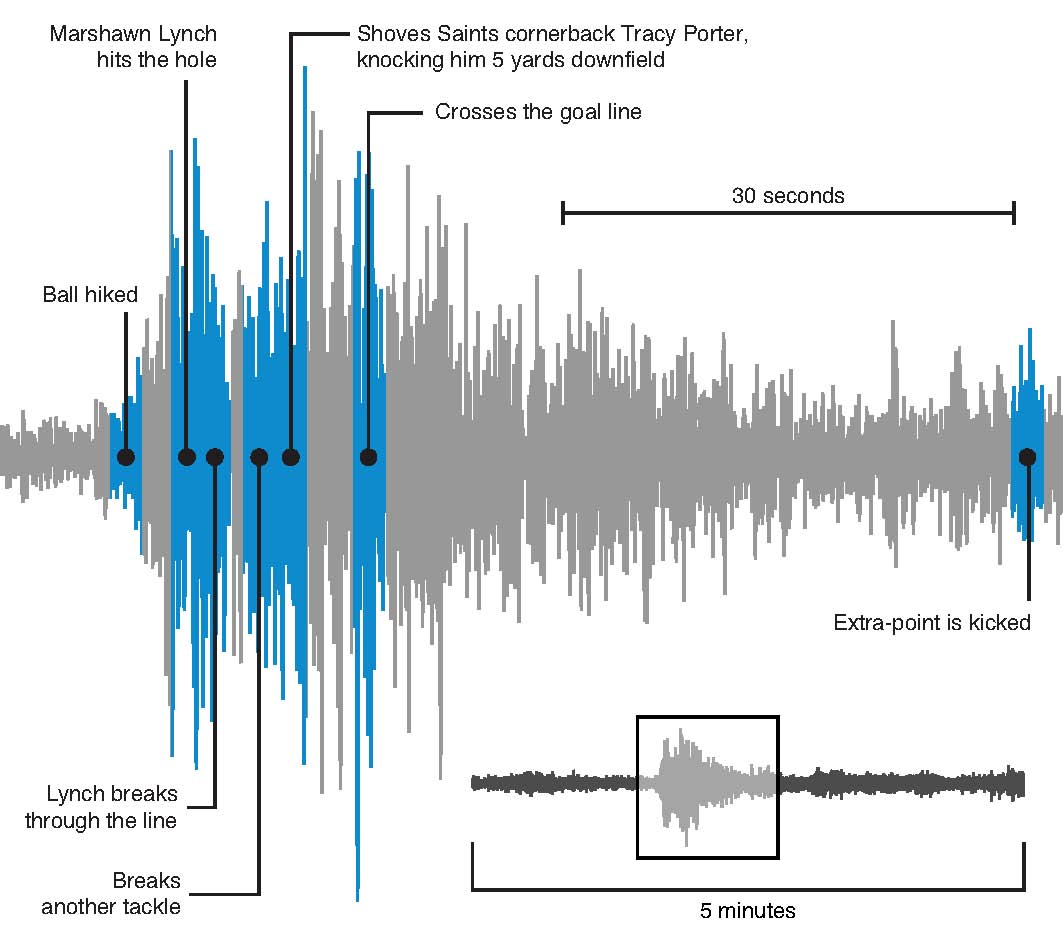 I spotted the wiggles on our seismogram, PNSN manager Paul Bodin verified the signal, and PNSN information officer Bill Steele forwarded the mostly unintelligible plots to a few local reporters. The next day, reports appeared everywhere, and the Seattle Times created a great visual (see figure). By the end of the week, Google reported 3,600 news outlets had the story, many reporters showed a spectrogram, hits on my name in Google had bumped up by 5,000, several long-lost friends resurfaced, and the story ran its course.

Then, with the possibility of the Seahawks playing another game in Seattle two weeks later, I felt compelled to verify that the “12th man earthquake,” or “Beast Quake,” was real and unique. I plotted the signal levels for all the home games of the 2010 season, shown below. The Saints game is the second row, with the Beast Quake in the red circle.

Indeed, no other signal of comparable amplitude, duration, and frequency content had happened during that game or the other eight home games this season—although I found a number of similar signals that were shorter and half as big. Also, more noise that was plausibly the play-off pre-game show, the raucous fans and their cars carousing out of the area afterwards, and some unidentified background noises. The fans seemed less raucous after the few losses. 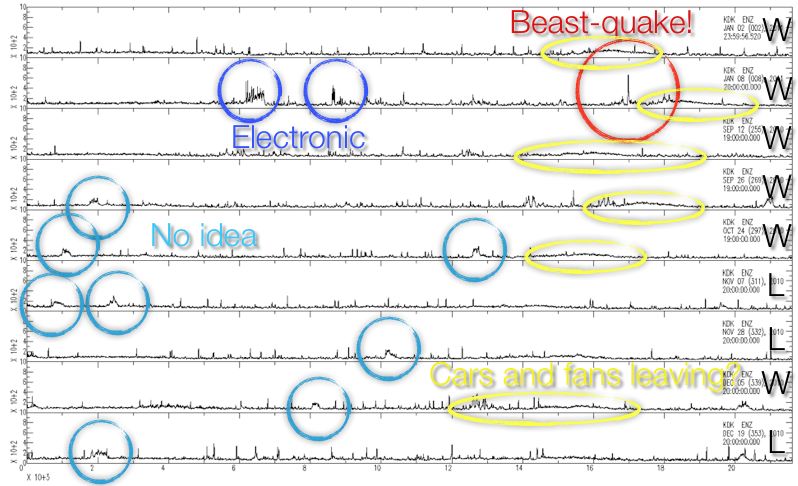 The Seahawks lost their away second-round playoff game, so, perhaps fortunately, fans did not have a chance to recreate or surpass their ground-shaking record, perhaps challenging the stadium. No one in the media asked how much the ground shook; only the engineers guarding the nearby and vulnerable Seattle seawall and viaduct inquired about this critical magnitude. One and all were content with the news item, except perhaps Saints fans and a Deadspin commentator.

(Blog entry is partly from a short article in the Seismological Research Letters.)