CB called meeting to order about 9:40, after self-introductions.

The agenda was agreed upon.

1. CB had requested regular updates on M9 project, on Hanford and eastern Washington developments, and indeed to receive quarterly update on all pertinent issues.  This was done last year.

2. Tim Walsh had spoken for research, education, and outreach regarding how to use EEW alerts.  Some of this work is underway nationally but more could be done in region.

Paul Bodin: State of the PNSN

Reviewed changes in PNSN management structure and relationships with partner agencies with this organization diagram. 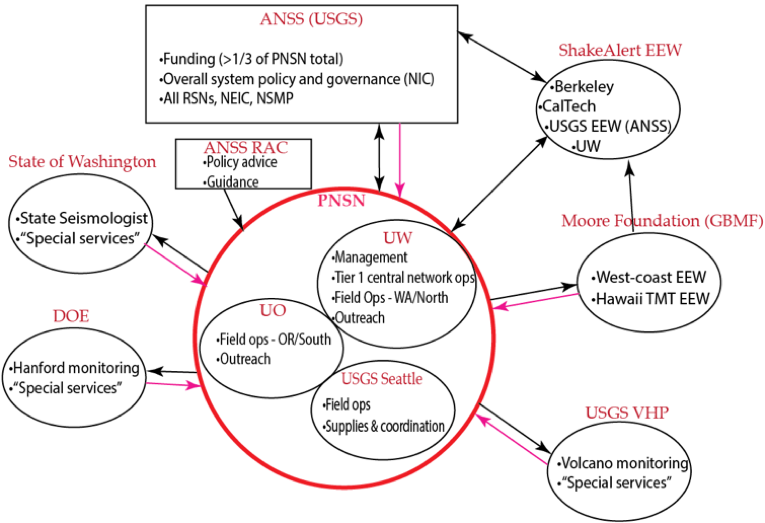 The USGS Volcano Hazards Program (VHP) and Earthquake Hazards Program  (EHP) now require completely separate proposals for funding and greater specificity on how funds are allocated.  Together they represent ~38% of PNSN funding excluding the substantial direct contributions made by the USGS Seattle Field Station Staff, who are co-located with the PNSN at UW.  The EEW-Moore Foundation will end next year or so.

The pie chart shows the distribution of funding sources (but does not including USGS coop with UO and direct funding of USGS Seattle operations).  Paul foresees 2 years of stable funding. 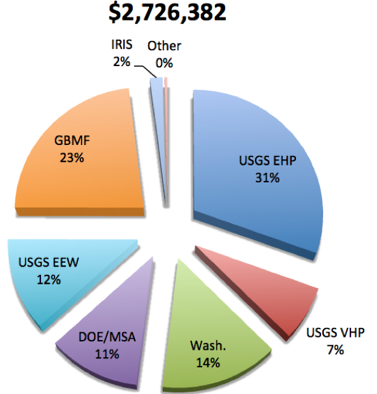 The USGS supports one seismologist and two field engineers as part of the PNSN field operations.  Weaver highlighted recent USGS accomplishments in earthquake hazard studies in the Pacific Northwest.  Recent USGS activities include: 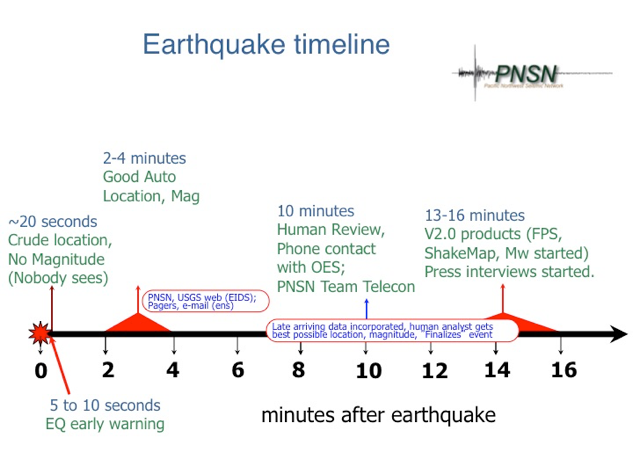 Showed our standard EQ processing time line vs. EEW demands (roughly an order of magnitude compression of the time line).  John reviewed the performance of ShakeAlert noting that despite some unexpected problems (now solved), the M6 South Napa Earthquake triggered useful alerts for SF and the Bay Area.  He noted most injuries and losses are due to non-structural hazards and even brief alerts can make a large impact in reducing these.

Still there are inadequacies of current shake alert display.  Some feel map diverts attention and lengthens response time needed for people to take protective actions.  Audible countdown needs to be clearer and contain useful messaging when time is available.

John reviewed our efforts to incorporate geodetic data into our PNW EEW system later this year.  The Japanese warning system did not provide accurate estimates of shaking for the Tokyo region because it depended upon a point source origin for seismic energy rather than distribution of the energy release along a finite fault plane that can be constrained using real time GPS data.

Early testing of the PNW ShakeAlert software has shown generally good results with some problems due to inadequate station coverage.  The M7.8, 678 Km deep earthquake generated seismic waves that tricked the PNSN and California automatic EEW systems into sending out false alerts.  The mistakes were quickly identified by duty seismologists and corrected. 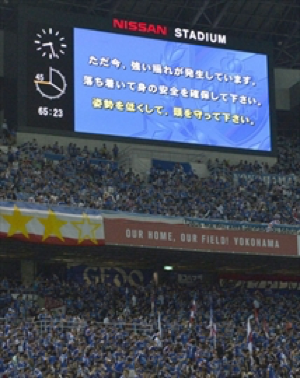 John also discussed how BART trains use CISN EEW Alerts to slow and stop trains to prevent derailments.  A comment was made that BNSF trains will be carrying more volatile crude oil and other dangerous substances and asked if they are participating in the pilot test.  They are not at this time.

John ended with a description of the political work underway to build bi-partisan support on the hill for EEW and reviewed some outstanding issues that need more work in the coming year.

In 2014, FEMA NEHRP and its partner EERI supported a State Support request from California OES to conduct Earthquake Early Warning Education Planning.  California OES formed a committee that developed recommendations on an Education and Training Program for EEW.  They are looking to continue this project in 2015.  Also UASI dollars were used to expand strong motion monitoring in the LA area.

Erin introduced the interdisciplinary M9 project to the committee and briefly described its various components. Her Powerpoint is also linked.

Issues under discussion for next iteration of maps:

Tim: ASCE-17(?)  has committee looking into Tsunami loads.  Not much input from Tsunami science committee, more from the engineering side.  Maps they’re using are somewhat controversial.

John V: How would you incorporate basins in cities other than the 3 you’re looking at?

CB: Not really clear. Even the approach in the 3 cities varies by city.  Lack of manpower a big issue.

Agency is in the midst of management, fiscal and budget crisis, outlook for 2015-2017 uncertain.

Agency is undergoing comprehensive financial and business practice review and has experienced a complete turnover of management since January.  The agency budget has been taken out of the normal Legislative process.

• Guiding force is NVEWS.  Never received an authorization vote (the Volcano analog of ANSS).  8 very high threat volcanoes in PNW: primary foci for development.  Priorities:  Mt Hood has 3 sites in a several-year process after denial of categorical exemption; need to go through full environmental review, and thus will take another year.  Scoping letter released last week.  Had a recent meeting with Jim Pena, who suggested for uber environmental process for all volcanoes in national forest.  An important milestone:  CVO has installed and now operates, 26 seismic station (and gps too).  Impacts to network to consider:  80% probability of an eruption in next 50 years.  Community preparedness is big push in light of that.  Last month:  NIMS training; has consequences.

NSMP:  Primarily band-aids in the plan due to lack of resources, need to re-capitalize.  Automatic data processing by IRIS is under study.

Q: How fast after quake before SMO data available for engineers?

Doug:  There will be a DOGAMI function even if agency structure is slightly different.  Doug willing to talk to press.  OEM should be the contact.  Feels that there is an opportunity to un-silo the Oregon agencies knot and redefine a communications plan.

Jeff Soulages:  OSSPAC.  Althea Rizzo manages the earthquake program and OEM has a new Director.  Since new resiliency plan, there is attempt to coalesce and get State Resiliency Office that would oversee efforts within all State agencies.  Pushing to get program continuity beyond the current all-volunteer effort.  Lots of energy in state (OR) but mostly due to volunteer efforts.

CREW is also primarily a volunteer effort but has paid executive director and a budget of ~ 200K/yr., some of which is for State program support.

A messaging meeting is needed to develop coherent communications for the Cascadia Region involving States and BC Province.  Something like CVO’s volcano hazards working groups?

Gomberg: CREW is working on a communications development project that USGS SAFR is interested in funding.

Someone suggested the need for a single organization for messaging.

Gomberg:  Subduction Zone Observatory a step in that direction?

Formulating an action plan to contact Swiss Re & Murdock, say.

Could look at Moore and other potential funding resources.

Bill asked for an Advisory Committee sub-committee to guide the effort.

Meeting was adjourned at 3:30