This is a guest post by Former State Representative Jim Buck. The views expressed below are solely those of the author. The PNSN strongly shares his concerns regarding the alarming number of seismically-unsafe school buildings and the lack of urgency in addressing this hazard to the children of Washington state.

Jim Buck is a West Point graduate with an engineeering degree. He's worked on everything to from septic systems to nuclear plants. Jim served in the Legislature from 1995 to 2006. He volunteers his engineering and legislative experience to help the Olympic Peninsula prepare for the Cascadia Earthquake. Survivable school buildings and low student/staff casualties will be a big help when "all-hands-on-deck" is required for the emergency response. We can use the schools for shelters and the kids can help with rescue and response.

On June 30, 2021, The Department of Natural Resources released the School Seismic Safety Project (SSSP) 2019-2021 Legislative Report. This report summarizes the earthquake risk at 561 school buildings (274 schools at 245 campuses) across the state. The methodology used by DNR’s Washington Geological Survey and the Reid Middleton contractors is very well done. There can be no question as to the accuracy of their findings. However, the report is so long and technical that it is difficult for most people to read. It is not surprising that there was no fanfare, no press coverage and no public outcry. Unless you are an engineer, reading the study is incomprehensible - so let me break this down for you.

The study concluded that 93% of Washington school buildings examined rated a one-star grade on a five-star grading scale. Here is a sample of why the study is hard to read. “Schools with a one-star rating can expect “performance as a whole would lead to multiple or widespread conditions known to be associated with earthquake-related collapse resulting in injury, entrapment, or death.” In plain English that means some or all of 93% of the schools studied are likely to collapse during a design-level earthquake leading to death, injury and entrapment of students and staff.

An additional 4% of school buildings examined rated a two-star grade. Schools with a two-star rating are likely to experience partial collapse resulting in injury, entrapment, or death of students.”

The remaining 3% of Washington school buildings examined rated a three-star grade on a five-star grading scale. Schools with a three-star rating are unlikely to experience severe structural damage and loss of life.” 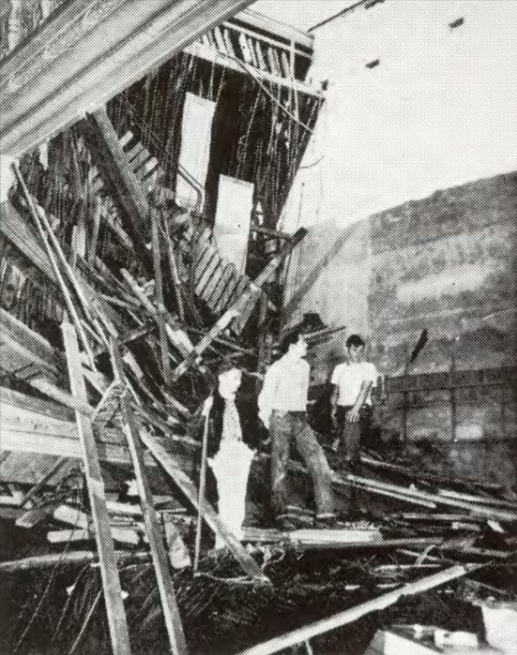 The Puyallup High School auditorium after the M 6.7 Olympia earthquake of 1949. Many of Washington's schools are no better prepared today. Photo by Larry Dion of the Seattle Times.

The earthquake study also examined “59 buildings at 28 schools in mapped tsunami inundation zones based on mapping conducted and published by DNR (Fig. 2). These schools were assessed solely on seismic risk (as this was the legislative directive).” I believe this was wasted effort. These schools should be moved out of the tsunami zones. There is 15% chance a great Cascadia Subduction Zone Earthquake will occur in the next 50 years. The predicted tsunami would destroy the school and any improvements forcing us to construct new buildings anyway.

The methodology used by DNR’s Washington Geological Survey and the Reid Middleton contractors is very well done. It properly addresses the scope of work the legislature commissioned it to examine. The entire study is couched in terms of the cost in dollars that a “design” earthquake may cost, costs for seismic retrofit, costs to repair facilities, levy approvals for seismic upgrades and capital budget speak about what a great job the Washington Legislature has done so far to address earthquake effects on schools.

HOWEVER, THE STUDY IGNORES THE LOSS OF LIFE OUR COMMUNITIES WILL FACE IF SCHOOL IS IN SESSION, DURING A “DESIGN EARTHQUAKE,” LET ALONE A CASCADIA SUBDUCTION QUAKE. The last sentence on page 6 sums up where the state’s priorities are. It says, “There are also negative economic impacts associated with loss of life, injuries, and the prolonged closure of damaged schools. Prolonged closures can lead to increased costs for school districts, and can require parents to find childcare or alternative educational activities for their children.” Obviously, the inconvenience of “negative economic impacts” such as death and injury are more important than the life safety of the kids.

Oregon and British Columbia are upgrading their schools and have already spent years addressing this problem.

Oregon Lawmakers spent $300 million to prepare Oregon schools for the big one in just one year, 2015. A portion of the money, $175 million, will go in grants to seismically upgrade schools. The rest will go to school districts that pass a bond to improve their facilities.

California has been upgrading its schools for nearly 90-years. The state spent $8 to $12 billion on school seismic retrofit between 1989 and 2018 in just the San Francisco Bay Area. 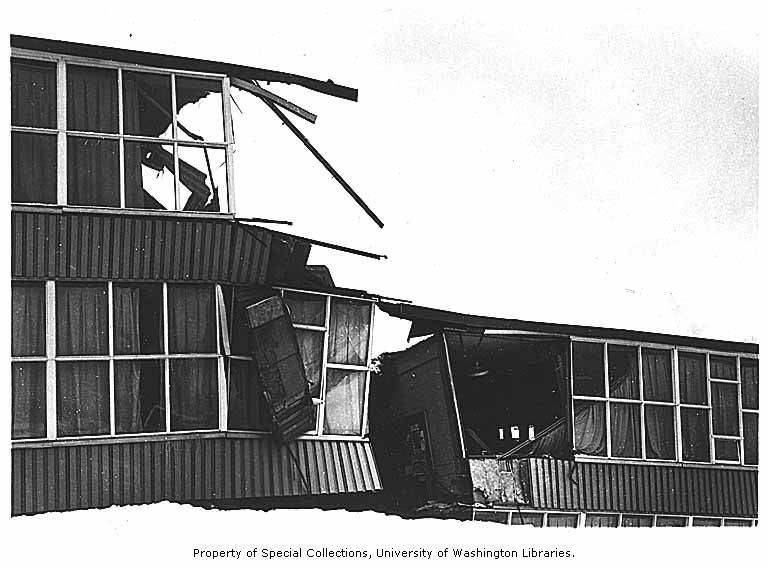 Damage to an elementary school in Anchorage, Alaska, from the massive Good Friday earthquake of 1964. Photo from the University of Washington Library's Special Collections.

Washington’s seismic safety efforts are way behind the rest of the west coast. The state has known about the risk for years. According FEMA’s 2013 HiTrac Study, there is a is a 33% chance of a magnitude 8.0 earthquake on the Cascadia Subduction Zone in the next 50 years. There is a 10-15% chance of a magnitude 9.0 or greater quake during the same time period. HiTrac did not even include the chances of potentially devastating earthquakes on the Puget Sound faults. This means fixing our schools can’t wait for more studies, procrastination and excuses from our elected representatives.

“This School Seismic Safety Project has been funded by the Washington State capital budget with Phase 1 in the 2017–2019 biennium at $1,200,000 and Phase 2 during the 2019–2021 biennium at $2,200,000. Washington’s legislature appropriated $13.24M to the Office of the Superintendent of Public Instruction (OSPI) for the School Seismic Safety Retrofit Program in 2020. An additional $40 million is appropriated in the 2021-2023 budget. This paltry amount of funding is budget dust when dealing with an issue this deadly.

So, in a state where your children can’t get in a boat without a life jacket or sit in a car without a child seat, you are by law, required to take them to a school that may be unsafe in an earthquake. You might want to get after your elected officials about this.