Why aren't there any volcanoes in the Olympic Mountains?

Why aren't there any volcanoes in the Olympic Mountains?

There are plenty of volcanoes in the Cascade Mountains of the Pacific Northwest, produced by the subduction of the Juan de Fuca Plate beneath the North American plate along the Cascadia Subduction Zone (CSZ). The nearby Olympic Mountains of Washington State, however, do not have any volcanoes. This raises the question: why are the Cascade Mountains volcanic, but the Olympic Mountains are not? They both lie along the same section of the CSZ, and they’re only a few hundred kilometers apart, separated by the Puget Sound lowlands. What makes the two mountain ranges so different? 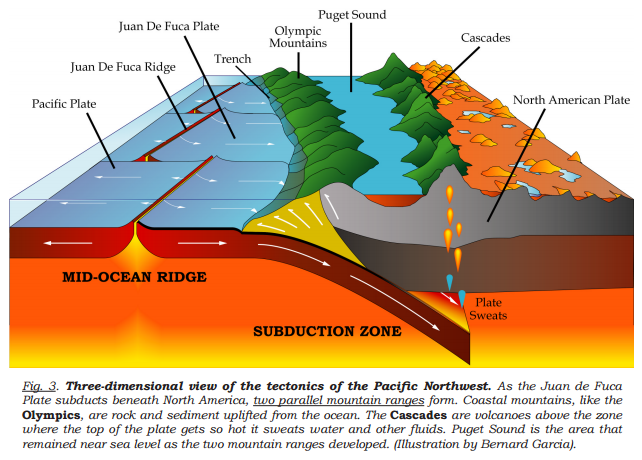 Subduction zones like the CSZ tend to produce the same basic pair of geologic features: volcanoes and accretionary wedges. Volcanoes form above the zone where the subducting slab reaches about 100 km depth and begins to release water into the overlying mantle rock. Just like salt lowers the melting temperature of ice, water and other contaminants lower the melting temperature of solid rock, allowing magma to form without an increase in temperature. The magma eventually migrates toward the surface and erupts as lava from a volcano. Until the slab reaches that specific depth, the temperature and pressure conditions aren’t quite right for melting to happen, which is why our Cascade volcanoes are so far inland from the Cascadia Fault.

The Olympic Mountain Range is non-volcanic because it is actually a huge accretionary wedge. Unlike volcanoes, accretionary wedges form near the shallow end of the subducting slab as pieces of oceanic crust and marine sediment get plowed into a “wedge” by the overlying plate (imagine using your hand to sweep sand or dirt across a table). Often, accretionary wedges are hidden below sea level or produce gentle coastal ranges, but the Olympics are a rare exception - the slab beneath the Olympic Peninsula is colder and dips at a shallower angle than other sections of the CSZ, which may explain the unusually high elevation of the Olympic Range. Because it is an accretionary wedge, the western side of the Olympic Peninsula is largely made of up ocean sediments scraped off the Juan de Fuca Plate. If you were to hike to the tip of Hurricane Ridge, you might even find shelly limestones and sandstones with marine fossils in them!