The seismonerds have known for weeks that small quakes were vibrating the ground 20 km northwest of Mount St Helens.  The pattern of a sporatic dribble of tremors, known as an earthquake swarm, stepped up this afternoon with three events of M3.7, M3.4, and M3.1, plus a plague of smaller events, catching the attention of everyone in the area.  The time progression is shown below - two weeks with a dozen or so M0 to M2 events, then the rapidfire burst today.

ALL the M3+ earthqukes in the mapped region since 1990 are shown in this map.  Red dots mark the shallow quakes near the summit of Mount St Helens.  The lefthand cluster of dots is this swarm, the other 3 dots visible were individual earthquakes in 2009, 2011, and 2012.  As all these blue and yellow dots came in the last 4 years, clearly it has been more active than usual. 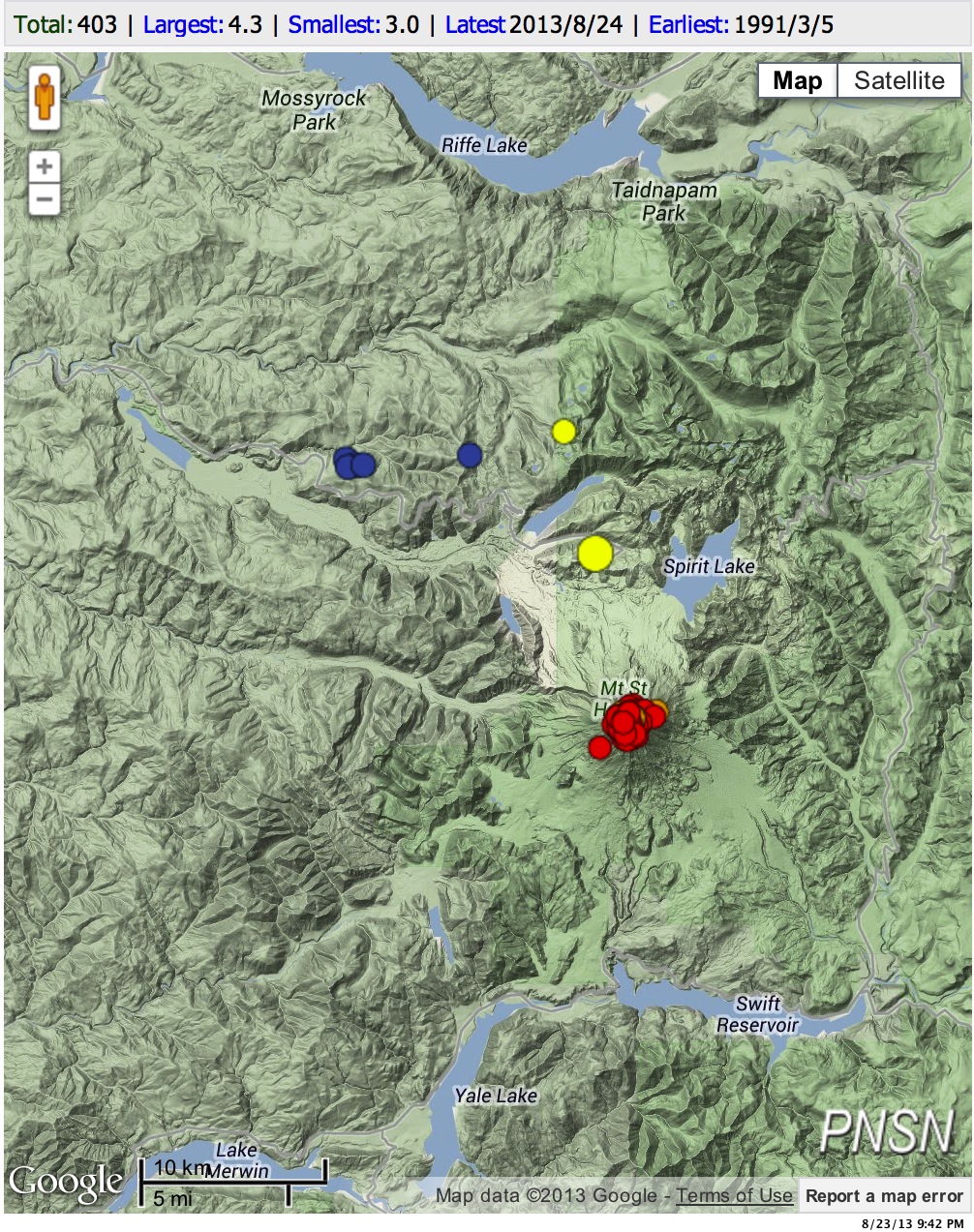 Another way to look at this quakes is in cross-section.  Here we collect the earthquakes in the shaded region, and plot how they are distributed in depth from Point A to Point B. 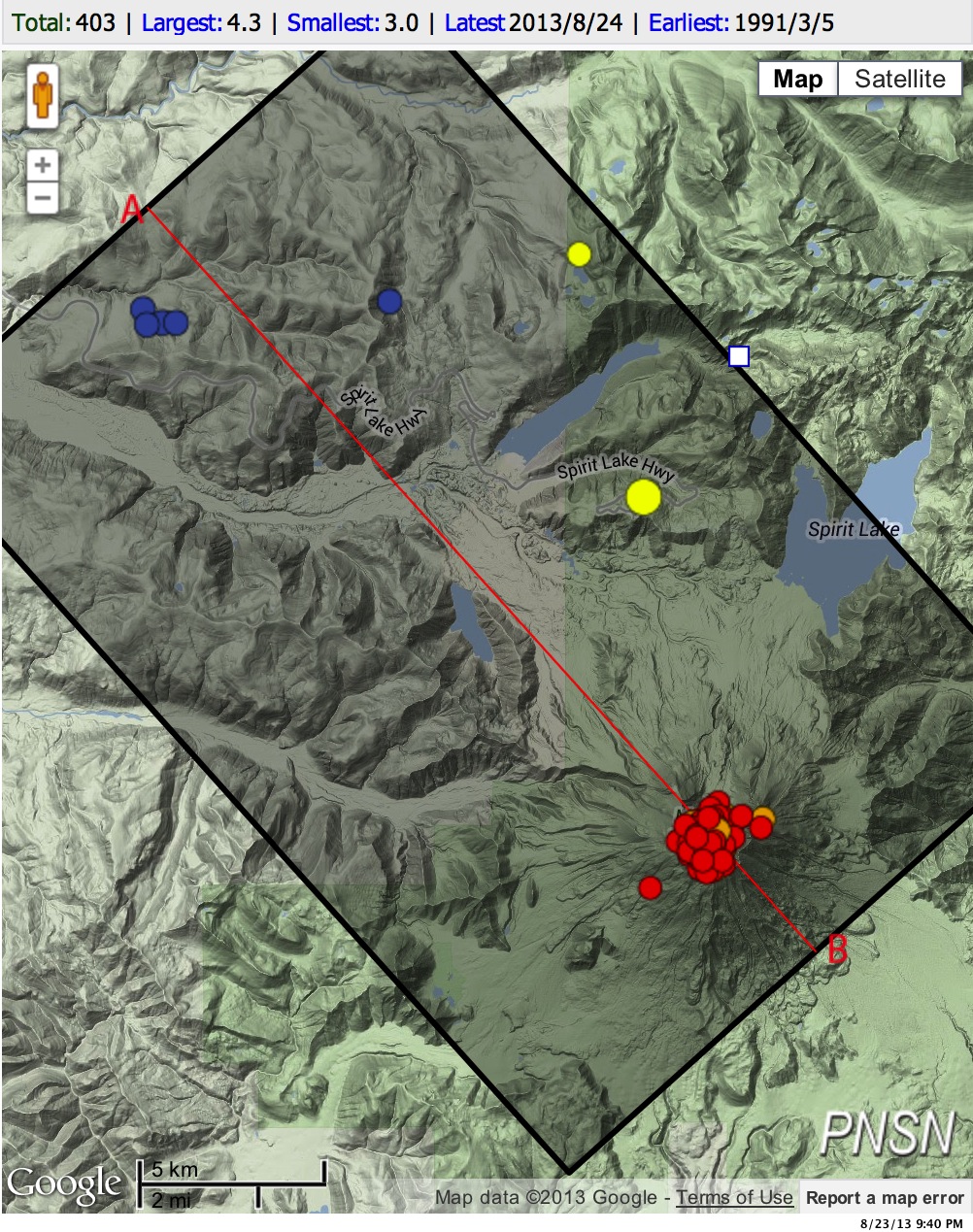 The cross section shows that today's quakes are deep, the quakes closer to the volcano are shallower, and the under right under the summit are just a couple of km down.  Interesting, but I don't know what it means.

Finally, we plot all the earthquakes in the last week.  The quakes fill an area several km long, it is also has a range of about 1-2 km in depth.  It is too soon to tell if the section of fault that is moving is that long, or if our locations are so imprecise that the spread indicates the error in location. 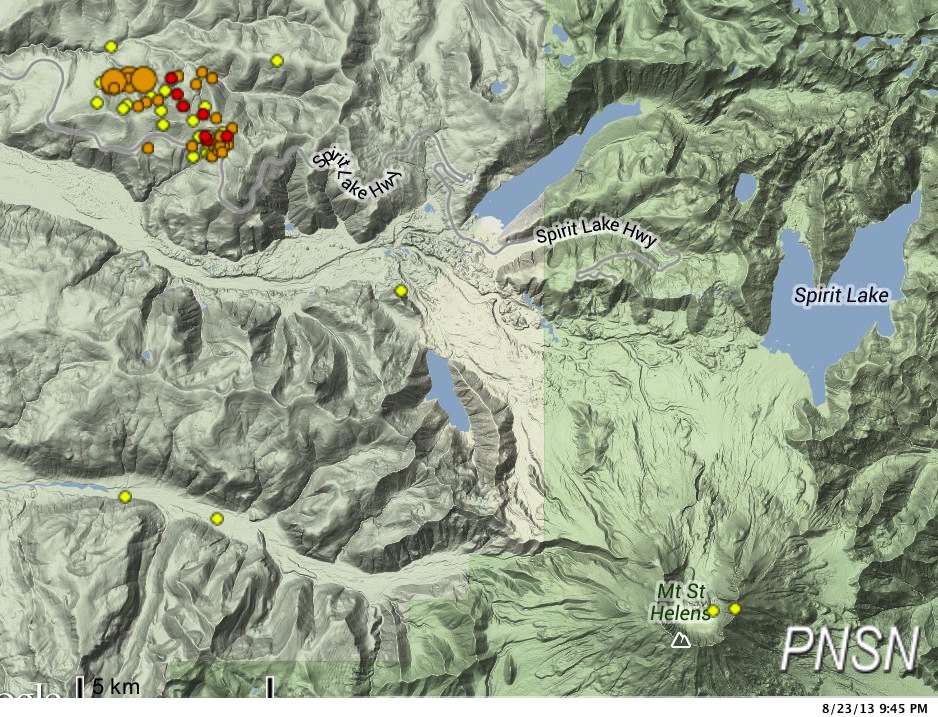 So what is the bottom line?  There is nothing special about this burst of earthquakes to make us more nervous than we ordinarily would be after a moderate earthquake.  Bursts of earthquakes this near Mount St Helen are infrequent, but the events are not close enough to the volcano to be associated with magma activity.  So as usual, our response is to open our eyes a little wider for a while.