Newberry is one of the largest Quaternary volcanoes in the United States, with a caldera that spans 6 to 8 km across. The center of the volcano is located about 35 km SE of Bend, OR.

Construction of the volcano began about 400,000 years ago; since that time it has erupted in a variety of styles ranging from basalt flows to far-reaching explosions of ash. A major explosion and collapse event about 75,000 years ago created Newberry's summit caldera. The caldera contains multiple hot springs, indicating that it is still hydrothermally active. These hot springs and multiple youthful lava flows indicate that the volcano could reawaken at any time.

The Cascades Volcano Observatory and the PNSN cooperatively operate 8 seismometers in or near Newberry caldera. On average, we locate 0 earthquakes within 10 km of the volcano each decade.

Short-cut to spectrograms for Newberry Volcano

The only station located near Newberry before 2011 was NCO, located on the east flank of Newberry ~8 km ESE of the central crater.  Before 2011 when more stations started to be added to the Newberry network only larger earthquakes (M > 2.5) could be located here. After 2011, when there were enough seismograph stations nearby very small earthquakes could be recorded down to less than magnitude 1.

Recent seismicity (2000 - )
Below you will find an epicenter map, a time-depth plot and a count of earthquakes plot for the immediate Newberry Volcano area. These plots are for the time period since 2000. Seismicity here is spread over quite a large area (additional events fall outside this map).  However there is a tight cluster of mostly very small events located a few km directly west of the crater.  This is the site of a geothermal exploration experiment in which water was pumped into the crust at depths ~ 1 km to stimulate circulation.  This process can generate very small earthquakes. 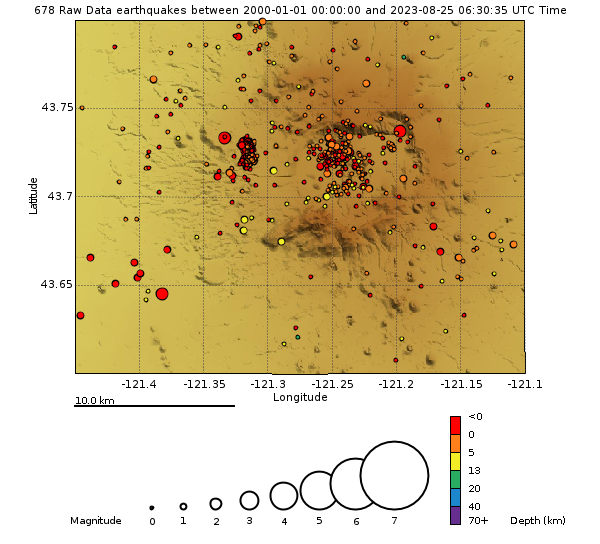 Below is a time-depth plot of events located near Newberry Volcano since 2000.  This plot is updated weekly... unless, of course unusual activity takes place that suggests a different time sequence is needed to better interpret that activity.

Here is a seismicity plot that shows the number of located earthquakes per week (black spikes) and the cumulative number of earthquakes over time (red).  This can point out periods when more events were located in a swarm such as the two significant bursts of activity in late 2012 and 2014.  These were periods of active pumping in the test geothermal wells resulting a many very small earthquakes over a period of a few weeks.