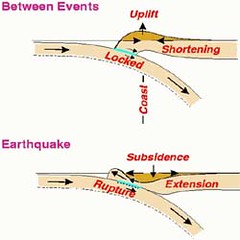 Between earthquakes, when the two converging plates are locked, internal stress stored by the plates slowly deforms the land, pushing it upward and in the direction of motion of the subducting plate (inland in Cascadia.)  When the plates slip in an earthquake, the toe of the overriding plate moves up and back and the previously uplifted land drops down to a lower position.

Soils record the environment in their sediment layers very well.  When the land surface drops abruptly during great earthquakes, large numbers of freshwater coastal plants die and leave evidence in the form of dark soils, called "peat".  At low tide, when the soil layers are exposed in riverbanks and you can see the "peaty horizon" exposed.  Over time, accumulated sediment and vegetation rebuild the land surface.

In this photo from Oregon's Salmon River the peaty layer is overlain by tsunami sands which are then covered by grey-green layers of marine plants and sediments.  You can also see two Native American campfire pits buried. In this video developed by IRIS (Incorperated Research Institutions of Seismology) with help from EarthScope, the USGS and others, the process that creates buried soils and ghost forests along our coast is illustrated.
Multiple cycles of peaty horizons and tsunami and marine deposits are found along Washington and Oregon coastal lowlands.  Brian Atwater, of the USGS, has studied and dated these layers at many places along our coasts.  He finds evidence for seven cycles of sudden submergence during the past 3,500 years; an average of 500 years between events.  The most recent horizon was dated by Carbon 14 to be between 320 and 410 years old. Dr. Atwater also published the story of an "The Orphan Tsunami of 1700—Japanese Clues to a Parent Earthquake in North America" that describes the impact of the Cascadia 1700 Tsunami on Japan. 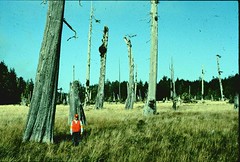