Landslides tend to occur where past landslides have happened. Where records have been kept, landslide inventory maps provide a useful first level view of where the risk is highest. Slope angle, subsurface geology, and rainfall data added to this knowledge base can inform landslide predictions and mitigation priorities. 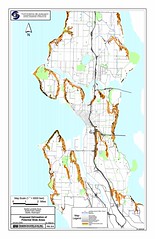 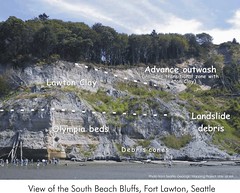 Harp, Michael, and Laprade produced a paper and map of shallow landslide hazards in Seattle as part of the Project Impact Partnership supported by FEMA, the USGS, and City of Seattle.

This Landslide Hazard Map was produced through a partnership of the City of Seattle, the USGS, and Shannon and WIlson, a geotechnical engineering firm based in Seattle.

The Oregon Department of Geology and Mineral Industries have produced a series of landslide inventory maps and integrated landslide hazards into a series of Oregon Relative Earthquake Hazard Maps.

The Washington Department of Natural Resources have also been active in assesing and monitoring landslides.