Shallow earthquakes in Cascadia, with depths no greater than about 35 km, are caused by the rupture of faults within the North American Plate. The sizes of earthquakes are related to how big their ruptures are, and the biggest crustal faults in our region could produce earthquakes with magnitudes as large as, perhaps, M7.5. Crustal earthquakes can and do occur throughout the Pacific Northwest, though they occur more frequently where the crust is deforming the fastest. The Puget Sound Region has the highest risk for large crustal earthquakes, though evidence has been found for large earthquakes in eastern Washington near Wenatchee, Yakima and further east, near Richland.

Crustal earthquakes are potentially the most damaging to the urban areas of the Puget Sound because several major population centers are located near or on top of known crustal faults. This means the seismic wave amplitudes will not be "attenuated" or diminished by long propagation paths between the earthquake source and major cities as is the case in Cascadia Subduction and deep intraplate earthquakes. Also, surface rupture offsets can inflict further damage beyond the shaking. 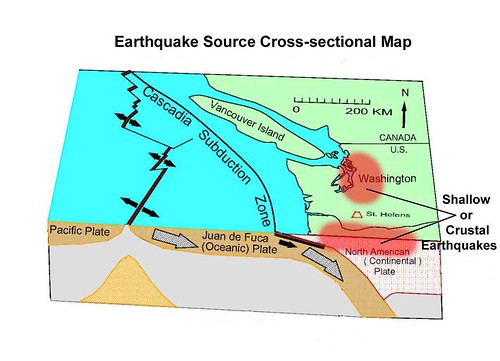 Seattle, in particular, is threatened by the Seattle Fault, which runs right through Seattle, beneath Centurylink Field, west across Bainbridge Island to Hood Canal and east out past Issaquah roughly following I-90.  This fault produced a large earthquake that left a geologic record of surface offsets about 1100 years ago.  This is only one of a series of active large crustal faults in the Puget Lowland. PNSN staff will continue to develop this section of the web site but to find more good information now, visit these resources: