Thunderbird holding whale is a prominent theme in Native art on the west coast of Vancouver Island, at the northern end of the Cascadia subduction zone (Malin, 1999). Stories of thunderbird and whale associated with shaking extend south at least as far as Tillamook, Oregon. Additional stories associating whale with shaking are found even further south into California. 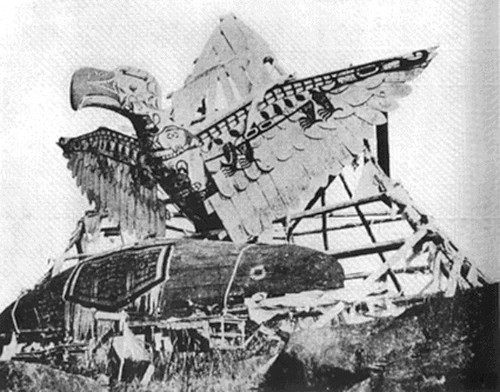 Nootka memorial erected in 1902-1903 to honor Chief Moqwinna (or Maquinna). The memorial depicts the thunderbird and the whale in front of the Conuma Peak, a snow-capped peak on which the thunderbird dwelt in one version of the thunderbird and whale myth. Nootka Sound, Vancouver Island. (Photograph in the W.A. Newcombe Collection) (Drucker, 1951, 1955) 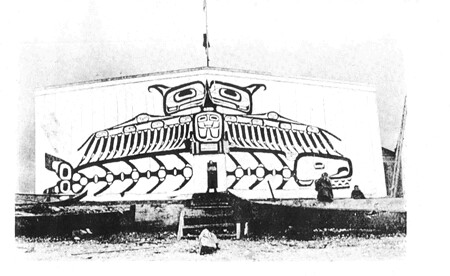 Kwakwaka'waka (Kwakiutl) house painted with the thunderbird and whale motif. This house was located at Alert Bay, Vancouver Island. It belonged to an important village leader, Tlah go glas, and the motif was his family crest. (Malin, 1999) The 'Namgis, one of the many Kwak'wala speaking nations in British Columbia, originally lived at the mouth of the Nimpkish River on Vancouver Island. They were "talked into" moving to Alert Bay on Cormorant Island after 1870 when they were offered work in the fish canneries there. Photo (Goddard,1934)

First Nation Map of BC 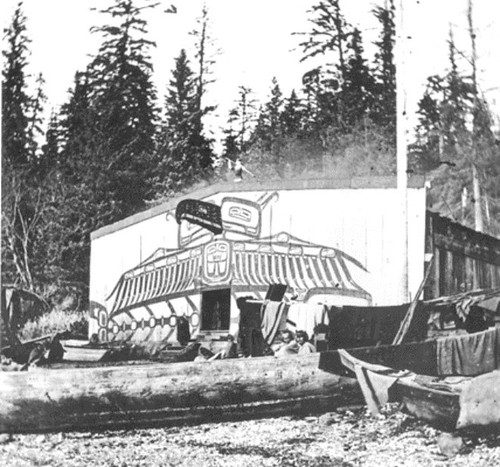 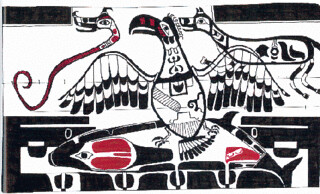 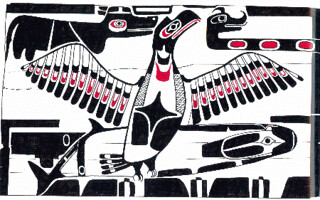 Two Nuu chaa nulth (Nootka) house screens, dating late 19th century. The screens depict the thunderbird, Tooksquin, carrying the whale in its talons. Whales were thought to be the thunderbird's favorite meal. Tooksquin's servants, the lighting serpents and the wolf are also shown. These screens were displayed in the house and screens such as these were commonly used in potlatches or in young women's coming-of-age ceremonies. (Graphic theme: Malin, 1999); (Photo: Jonaitis, 1988)

The screens commemorate "an Otpetchesaht chief's encounter with the supernatural while checking his sockeye traps at Sproat Falls." (Ruth Kirk, Wisdom of the Elders 1986, p. 50)

To learn more about the background on Pacific Northwest Indian Art, please visit

Carved Columns or Totem Posts of the Haidas by James Deans