Earthquake location in a nutshell

We locate earthquakes by using computers and a mathematical model of the speed with which seismic waves travel in the region to estimate the expected time of arrival of waves at seismometers in our network. The process is one of trial and error; the sort of task computers are very good at doing VERY fast. It works like this:

(1) Guess a starting location for the search; it doesn't need to be accurate at all (we usually use the time of first energy arriving at the first station as a guess).

(2) Given our model of wave propagation speeds, and our initial guess of the earthquake location, forecast the expected seismic wave arrival times at each of the stations recording the earthquake.

(5) Continue doing steps 2-4 until the differences between successive location estimates are stable and smaller than some predetermined threshold.

The computer performs the necessary arithmetic within a few seconds. For a more thorough discussion of this process  see How Are Earthquakes Located?

An earthquake location consists of 4 pieces of information, its latitude, longitude, depth, and origin time. So we need at least 4 seismic wave arrival times to estimate these four parameters.

A few notes and refinements ...

It sounds simple, but there are a few things to keep in mind when you look at our (or anybody's) earthquake locations. Here are the graduate-level concerns:

(1) Model dependence. The answer we get is only as good as the model we use of wave speeds in the region, and this is imperfect. In fact, when you think about it, the only way we know about the wave speeds in the region is by using earthquake seismic waves--Hmmm! that sounds like circular reasoning, eh? Yes it is. The good news is the more data we get, the more refined and detailed (and hopefully more accurate!) our model becomes.

(2) Sometimes it fails. Occasionally the adjustment process fails. The revised location jumps between two (or more) possible spots and can't converge any closer, nor decide between the two, or the location gets "wedged" against a velocity boundary in the model and can't jump across it. In these cases the computer essentially shrugs its shoulders and alerts a human. We are really good at finding a problem (like a bad arrival time) or thinking our way out of the box to a better answer. Ultimately, all of our locations are reviewed by humans. 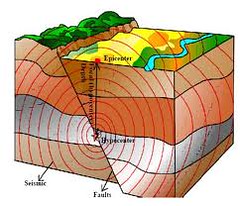 (4) Better scores don't necessarily mean better locations. The computer program judges the quality of a location by the average difference between expected and observed arrival times (on our event pages we call this the "rms" and it is measured in seconds). Theoretically, a small earthquake may just use 4 seismic wave arrival times, and will find the location with 0 rms! Perfect! The problem is that any uncertainty in the selected arrival time due to noise or other interference, and any imperfections in the mathematical model of wave propagation, lead directly to errors in location. On the other hand, more observed arrivals will inevitably lead to higher rms values--lower precision location. However, although the precision is lower, we are more certain that the location is accurate--the earthquake was where the model is telling us. Therefore, our locations come with numerous "quality factors" that quantify this tradeoff for each earthquake.