A seiche (pronounced: saysh) is a standing wave in an enclosed or partially enclosed body of water. Triggered by earthquake waves, seiches and seiche-related phenomena have been observed on lakes, reservoirs, swimming pools, bays, harbors and seas. The key requirement for formation of a seiche is that the body of water be at least partially bounded, allowing the formation of the standing wave. 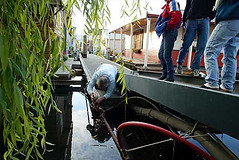 The Mw 7.9 Denali, Alaska earthquake of 3 November, 2002, caused minor damage to at least 20 houseboats in Seattle, Washington by initiating water waves in Lake Union. These seiches were likely initiated during the large amplitude seismic surface waves from this earthquake.