There are many sources of vibration of the earth that actually originate from sources in the air such as sonic booms, thunder or distant artillary.  If we were at the seismograph station when such events occurred we would hear them with our ears because they usually contain high (> 20 Hz) sound or accoustic waves.  However some of the energy is below our hearing and if strong enough, will couple into the ground causing seismic waves that the seismograph will record.  Sometimes the instrument itself will be shaken by the acoustic waves directly.

Example of accoustic waves from artillary practice on the Yakima Firing Range.

Below is a sample 10-minute spectrogram from seismic stations in the Hanford sub-region that have detected the accoustic airwaves from explosions (assumed to be artillary fire) we located in the northern Yakima Firing Range.  They are paticularly noticible on station MD2 and are convincingly accoustic waves by the large time gaps between signals on different stations.  The spectrogram is followed by an image of a seismogram for a much longer period of time inwhich one can see many such "blips" indicating that practice was going off and on over hours. 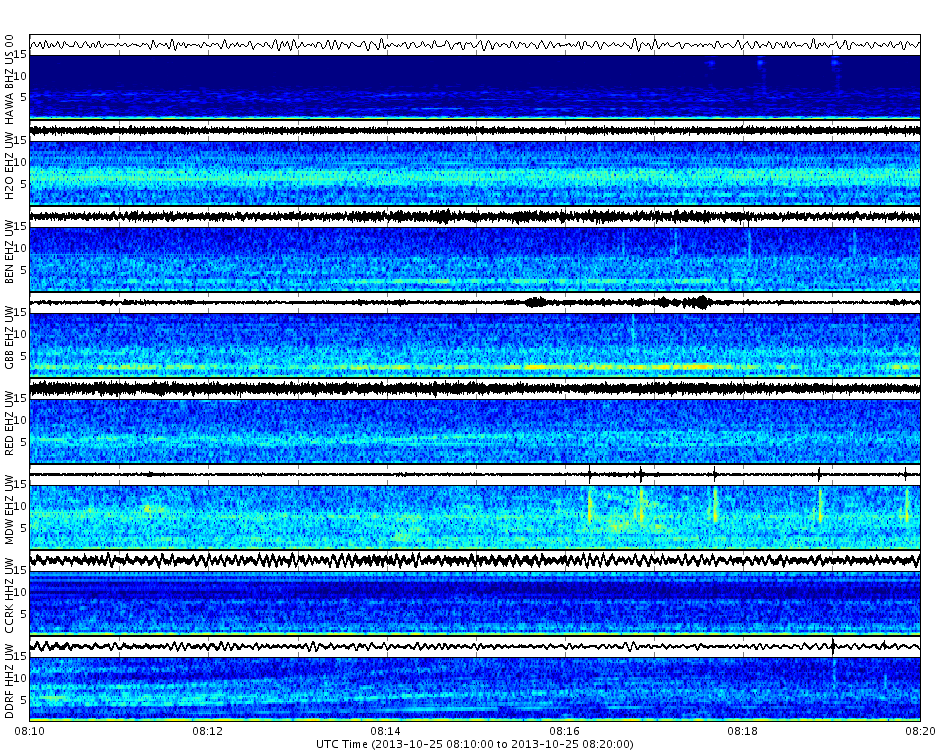 While we don't have an example (yet) of a helicopter signal they may show up on some stations at certain times of year.  During field season it is common to see a strong signal that bears resemblance to tremor but occurs only on a single station.  This signal is sustained, has an emergent onset and strong amplitude.  The spectrum may show a single strong frequency or it may exhibit harmonics.  This is the noise produced by a helicopter or even a small, nearby airplane.  You may also see scattered high-frequency noise afterwards that is probably due to footsteps near the seismometer.  Don’t be surprised if the instrument shuts off afterwards ... it’s just maintenance.  Using seismograms and spectrograms for such "detective" work can be a nice diversion for the professional seismic analyst from routine processing of earthquakes.

During the summer, thunderstorms are common over the mountains.  Seismic signals from thunder shaking the ground can easily be confused with more interesting sources such as avalanches or even earthquakes.  Because sound waves in the air travel much slower than vibrations in the ground, the signals from thunder will be spread out over more time than vibration sources originating in or on the earth.  When in doubt we also check with the weather service for known storm activity in the area.