QuickShake is a new tool developed by PNSN to display continuous seismic records with only a couple of seconds delay. It provides a faster connection between the sensors and the website. The software displays vibrations within 3-5 seconds – 5 to 10 times faster and more reliably than readings from previous real-time display. QuickShake also allows user to rescale the seismograms using the percentage of gravity (%g).

This tool is designed to demonstrate the possibility of Earthquake Early Warning to the public, and was tested using energy generated by Seahawk fans during NFC playoff games at CenturyLink in 2015. Given the 10-second delay built into televised NFL games, QuickShake displays when the fans went crazy ~5 seconds before the action unfolded on TV. We are developing this software to provide real-time views of seismic waves when a great earthquake starts to rumble our coastal seismometers. It could also provide an instantaneous tool for observers to keep an eye on a future earthquake swarm or a volcano that is acting up. 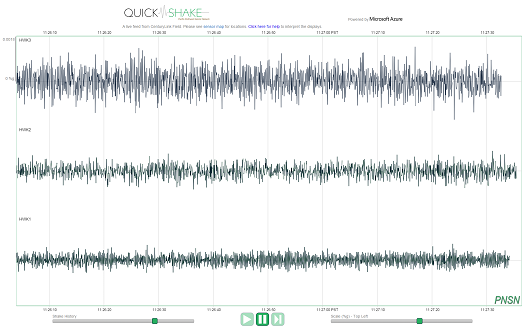